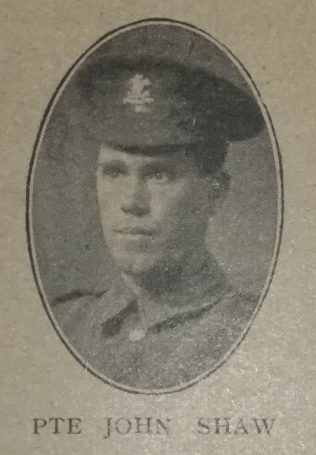 Private John Shaw was the eldest son of Mr. and Mrs. Walter Shaw, of Crewe Hall, Fardon, Whitchurch Circuit. He inherited Christian examples on both sides of his parentage for at least two generations. Personal geniality, business endowments, a highly developed moral and spiritual life – all gave promise of a life of rare usefulness. On June 15th 1916, he answered the call of his country, and in December he was sent to France and was soon in the trenches. Having an attack of trench fever, he would have been sent to England but for the enemy sinking our hospital ships. On July 18th, when on duty in a raiding party, an enemy shell burst near him inflicting serious wounds. Surgical and nursing skill did their best, even transfusing blood from another willing soldier into his body, but haemorrhage and weakness overcame him on July 29th. At his memorial service, conducted by the writer and Rev. A. G. A. Lees, former minister, the local chapel was filled with sympathising friends.