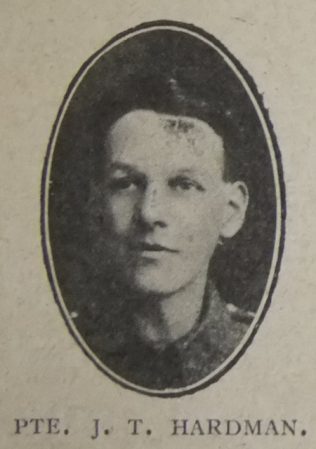 Private J. T. Hardman, of Bridge Street, Heywood, was shot by a German sniper in France on June 8th, 1917. He was in his twenty-first year, and was a Primitive Methodist of the third generation. The name of his grandfather – Robert Hardman- is still like ointment poured forth, and his honoured parents are members and officials of the above church today. There is a pathetic singularity about the fact that his mother serves as treasurer of our Soldiers’ Comfort Fund. His father, who for several years was in the employment of Sir W. P. Hartley, was the clerk of works of the last extension of Hartley College, Manchester. John was a young man of great promise, possessing a bright and loving disposition. He was a teacher in the primary, where he left behind a fragrant ministry. Much sympathy is felt for the bereaved family. On Sunday evening, June 17th, the Rev. C. Moore conducted a largely attended memorial service, when among the many sympathisers present was the Mayor of Heywood.