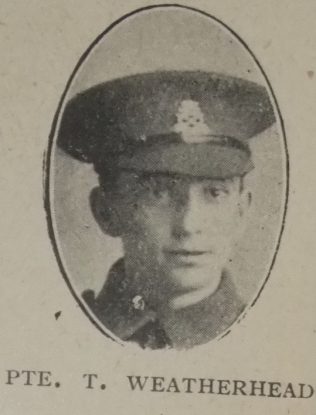 He was only nineteen years of age, and had been in the Army but seven months when he made the great sacrifice. He was a member of the choir, organist in the Institute, and an ardent C.E. worker; and in very many ways rendered invaluable service to the Church that was so dear to him.

The place he held in the affections of all who knew him was revealed in the largely-attended memorial service, conducted by the minister. The address was based on the incident of David’s heroic followers breaking through the Philistine hosts to bring their beloved chief water from Bethlehem’s well. A few weeks after the service we learnt that Tom Weatherhead received his death wounds while bringing water for his comrades! He was a loving, devoted son, and a good soldier of Jesus Christ.

Tom was Private 48457 in the Prince of Wales’s (North Staffordshire Regiment), 4th Battalion.