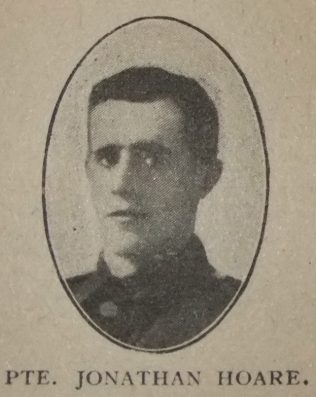 Jonathan Hoare was born at Addison Colliery, in the Blaydon circuit, in 1893, and attended our Sunday school there as a scholar and teacher, until he was called into the Army, in June 1918. Within four months of that date he had finished his training, lived a month of horror in the trenches, and laid down his life at the call of his country. At the age of seventeen he became a member of our Church, and was a devoted worker in the Band of Hope and Junior Endeavour. When he joined the Army he was a candidate for the plan, and in his studies was revealing a great anxiety to become efficient for his work. His character made a fine impression in the circuit, and the news of his sacrifice was received with widespread sorrow. His death is mourned by his wife, the daughter of our circuit secretary, and the memorial service was a fine tribute to one whose earthly career had been cut short but effective because of its goodness..

Jonathan was Private 77610 in the Prince of Wales’s Own (West Yorkshire Regiment), 1st Battalion. He died of wounds on 1 November 1918.

Jonathan was a miner before being called up. He married Meggie Moody on 10 June 1916 at Blaydon.