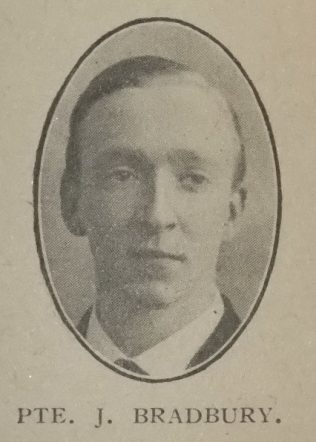 Private Joseph Bradbury, at the age of twenty-seven years, on the eve of the Armistice, paid the supreme price in France, and was amongst those who, with peace in sight, fell a victim to the horrors of war. Like many others, his life was given a sacrifice to make the world better. He was one of the most promising young men in Bollington Church, and served in the choir and in other departments of our work. He was well educated, and was a school teacher in Manchester, returning home each night. Great sympathy is felt with his widowed mother and grandmother, and other members of the family in their sad bereavement, but Christian faith enables them to anticipate a happy re-union in the unclouded peace of heaven.