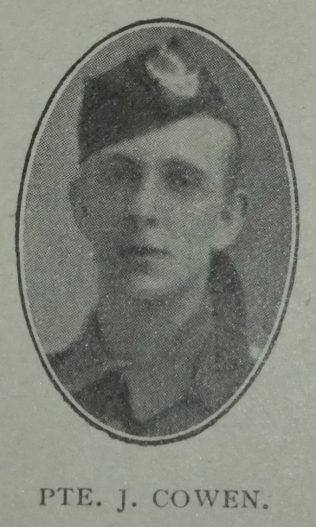 Pte. Joseph Cowen was the son of William Cowen, a local preacher on the Whitehaven Circuit. Both father and mother are active members of our Church, and generous in their support. Joseph Cowen was a member of the church and men’s Bible class. He joined the Seaforth Highlanders in May last, and was killed in action on January 7th, 1916. Joseph Cowen had a distinguished school career. He took honours in the French language in the Senior Oxford Examinations and at Leeds College. From the College and the school staff where he was engaged as a teacher letters have been received speaking of his splendid qualities as a man, and of high expectations in his profession. His only brother is a lance-corporal in the 5th Border Regt. Great sympathy is felt and expressed with the family. A memorial service was held in our church, when reference was made to his character and work by Rev. E. Campbell, who conducted the service.

Joseph was private S/8692 in the Seaforth Highlanders (Ross-shire Buffs, the Duke of Albany’s), 1st Battalion. He was killed in action in the Persian Gulf.