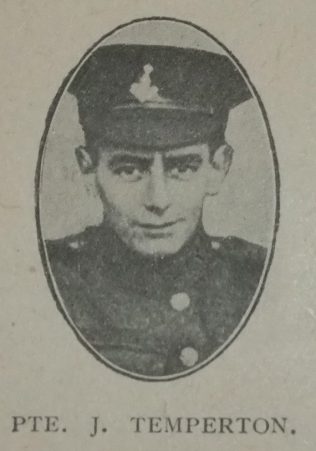 Joe Temperton was a quiet soul, one of “the excellent of the earth.” Leaving a clerkship to enlist in the Army, he was for some time retained within the shores of England, and was for a period happily not far from his home at Hull. With three other sons away, the father and mother were glad to have Joe near. But the crisis and official panic of March, 1918, sent him, who had never been regarded as strong enough for the arduous service abroad, into the front lines. He was reported missing in May, and in July the news (so far a relief) came that he was a prisoner in Germany. The Armistice raised eager expectations of his homecoming. The buzzers were roaring exultantly over the Humber, welcoming a succession of boats bringing returning prisoners; the arms of father and mother were outstretched to greet their loved one, when the crushing letter arrived with the news that Joe had died in a German hospital nine days before the Armistice. His body rests far away in a stranger’s soil, but he himself is in the Homeland.