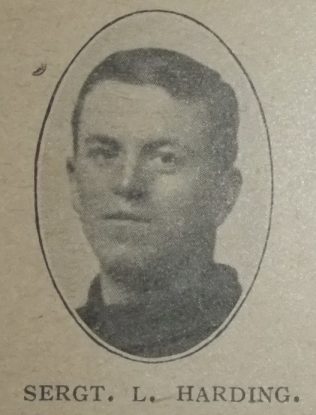 A life so rich in promise has been lost to our Paradise Row Church, Stockton, Leonard Harding. For twelve years he was associated with the above church in membership. He was a most enterprising and successful magazine steward for seven years. In disposition he was characterised by modesty and thoroughness. He possessed many lovable qualities of soul, and was dogged and persevering in all good works. He joined the Army in October, 1914, and was wounded in November, 1916. He was confined to hospital until March, and re-joined his regiment on the 25th of April, 1917. He was fatally wounded on July 31st, and passed to the Homeland on August 1st, 1917. He had won the esteem of his commanding officer, and was recommended for a commission before he made the great sacrifice. A memorial service was held in Paradise Row on Sunday, August 19th.

Before the war, Leonard worked as a grocery shop assistant.

Leonard was Sergeant 15826 in Prince Albert’s (Somerset Light Infantry), 8th Battalion. He was formerly 14305 in the Northumberland Fusiliers.