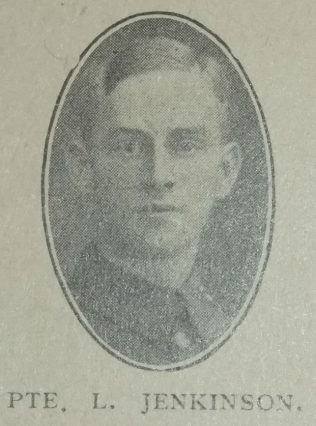 Leonard Jenkinson was the youngest son of Mr. and Mrs. John Jenkinson of Whitehaven. Every member of his family are active workers in our Church. Private Jenkinson was attached to the 5th Border Regiment, and was killed in action in France on October 1st. He was a young man endowed with singular gifts, and was a devoted worker in the Church. He was secretary of the Men’s Bible class, a class that has a Roll of Honour containing over sixty names of young men who have joined the army. He was an active C.E. worker and a local preacher on trial. We had hoped he would have joined his brother, J. W. Jenkinson, in the ranks of our ministry. He has been called to higher service. One of his last actions was to arrange for a branch of the Soldiers’ Christian Association in his regiment. There was a large and representative gathering at a Memorial Service held in our Howgill Street Church.

Leonard was Private 3330 in the Border Regiment, 5th Battalion.