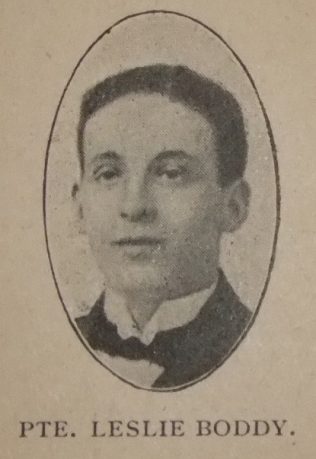 Our Starbeck Church has sustained a great loss in the tragic and sudden death of private Leslie Boddy, son of Thomas and Annie Boddy, of Starbeck, and a private in the Machine Gun Corps. He was only five weeks a member of this Corps and was stationed at Rugeley Camp. After an attack of influenza, followed by pneumonia, his somewhat delicate frame succumbed in the presence of his father and mother in the camp at Rugeley on November 6th, 1918, at the early age of eighteen. He was a fine young fellow and greatly beloved by all who knew him. He will be very much missed in the church, where he was very popular and useful. He was Sunday-school Secretary and an ardent Christian Endeavourer. He had a charming tenor voice and was a welcome soloist. He served his King and country as loyally as though he had fallen on the battlefield. The memorial service was conducted by the Rev. H.F. Johnson. There was present a full choir and a large congregation at the interment, which was conducted by the Rev. J.H. Slater.