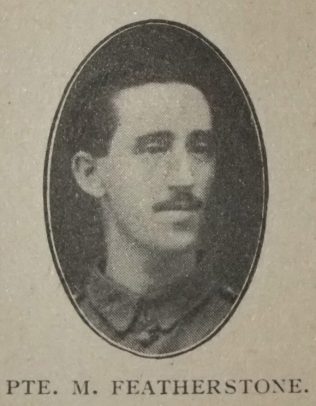 Pte. Matthew Featherstone passed into the higher life on October 30th, 1918. His parents are respected and useful members of our Church at Leeholme, in the Shildon Circuit. Matthew became an active Christian Endeavourer nine years ago. When the War broke out he heard the voice of God behind the call of his country, and he enlisted in the R.A.M.C. in 1915. He was sent to Dublin to be trained. From thence he proceeded to Malta, and then to Gallipoli. On the Peninsular he had several narrow escapes, but he was wonderfully preserved and was present at the evacuation. Shortly afterwards he was drafted to India. On October 29th he was taken ill with cholera. Despite all that could be done for him he died the following day in the Cumballa War Hospital, Bombay. One of his comrades writes: “He was certainly admired and respected by all.” A crowded and impressive memorial service, which was conducted by the Rev. John Brewis in our Leeholme Church, testified to the high regard in which he was held in his native place.

“ Far away from all who loved him
They laid him down to rest;
In a far away grave he is sleeping,
One of the best.”

Matthew was Private 56545 in the Royal Army Medical Corps.

Before the war, Matthew worked as a grocery shop assistant.