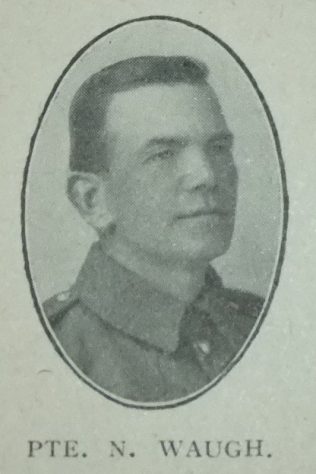 Our Church at Spenymoor suffered a great loss by the death, in France, of Gunner Nicholas Waugh. The son of devoted Primitive Methodists, he been associated with the Church all his life. He was a member for upwards of twenty years, first at page Bank, and afterwards at Rosa Street. For the six years preceding his enlistment, he held the position of society steward in our Rosa Street Church, and in that office he served with untiring enthusiasm. He was a Sunday school teacher and choir secretary. Those who were associated with him in the choir can never forget his zeal for its success.

In March, 1917, he enlisted in the R.G.A. After eight week’s training he was sent to France, and five weeks later was wounded. He died in hospital on July 5th, at the age of thirty-eight years. We have seldom heard such widespread expressions of sorrow as when the news of his death became known. He has left a widow and daughter, and for them deep sympathy is felt, for their loss is the greatest of all.

Nicholas was Gunner 143577 in the Royal Garrison Artillery.

Nicholas worked as a salesman before the war. He married Frances Newman in the summer of 1907. Their daughter was Mary (b1911).