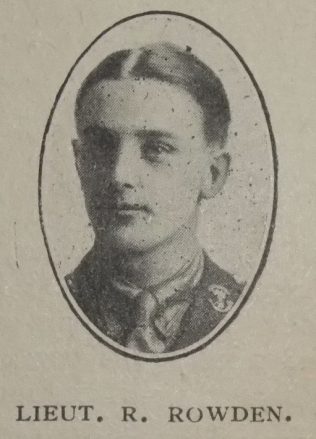 Reginald Rowden joined the London Rangers in September, 1914, and on the following Christmas Day went to France. In February, 1915, he was wounded at Ypres, and detained in hospital for five months. In October of that year he returned to France, and was given a commission with the Somerset Light Infantry. In August, 1916, he was wounded a second time, returning to France in that same year. In March, 1917, he was accepted into the R.F.C. and, after a short time once more went to France. On November 30th he was killed whilst flying over the enemy’s trenches. His death made a deep impression on all his comrades – officers and privates alike. On the day of his funeral many walked long distances to be present, bringing flowers to place on his grave. His father is our Sunday school superintendent at Mount Tabor and one of the most generous supports, and is heartily supported by his good wife. They feel keenly the loss of their son, having two other sons in the Army in France.

Reginald was Lieutenant (T) in the Royal Flying Corps. He was formerly Private 3228 in the 12th London Regiment.

Before the war, Reginald was a draughtsman.