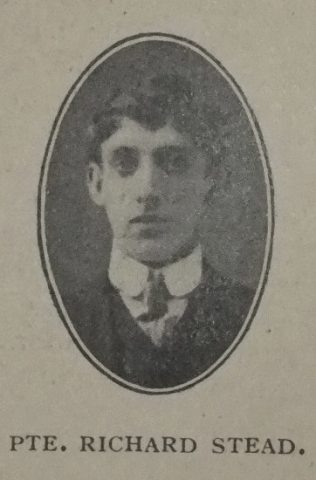 When Richard Stead laid down his life for his country, one of the finest young men in the Chester-le-Street Circuit was taken from us. For many years the Stead family have been a tower of strength in our village church at Kimblesworth, and their youngest son, Richard, following in the steps of his father and mother, was a loyal Primitive Methodist. When he enlisted in the Army, he occupied the post of organist, and was also a devoted Sunday school teacher and Christian Endeavourer. He had not been many months at the Front when he made the great sacrifice. Celebrating his twenty-first birthday in the trenches, he was the third son Mr. and Mrs. Geo. Stead have lost in their early manhood, one being killed in the mine, and another who succumbed to an epidemic. A memorial service conducted by the writer was held in the church. Every church in the village was represented, and testimony was born by the preacher to the blameless life Richard Stead had lived.