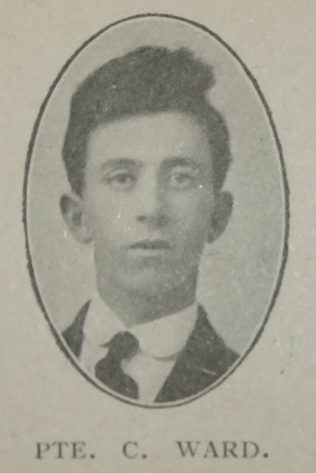 Claude Ward was the pride of his loving home, and one of the brightest, noblest young fellows of Portobello Church, Hull, which before enlistment he had finely served as school secretary. When still seventeen he found his way into the Army life on October 2nd, 1915, and in July, 1916, he left England for the hard lot of an exile in Mesopotamia, where he endured not only the arduous campaigning work, without break or spell of leave, but also the weary waiting for demobilisation, with hope continually deferred. The Armistice had found him unscathed, and from an illness at Christmas-time he emerged once more fit for duty. But in the middle of April bronchial pneumonia laid him low, and he was called to take his journey into “that strange country t’other side of the range.” It seems a cruel loss, without the comfort even of any immediate relevance to the ideals the War was fought to serve. Round his strong, winsome personality many friendships gathered; his companions in the ward which saw his last illness knew him for the fine soul he was.

He was known as Claude to distinguish him from his father, also called Robert.