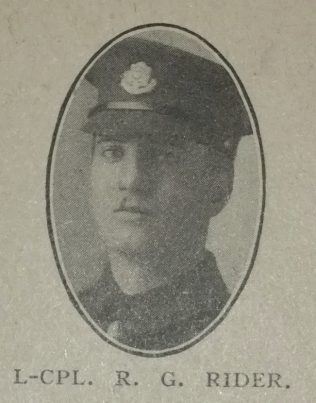 A young man of great promise passed from the service of our Church when Lce.-Cpl. Robert G. Rider died of wounds at Bayreuth, Bavaria, in August, 1918. He was an accepted candidate for the ministry. As local preacher, he had taken the first prize in the Connexional Examination, and served with great acceptance on the Middlesborough Station.

Writing in one of his last letters, he says the new view of life came to him from the kindly influence and prayers of his mother, and that of the friends at Gilkes Street, particularly of one of the young men (Norman James). So he was led to make the great decision. He closed his letter, saying: “With God’s good grace I am standing the test.”

By his soldier’s will, made while in the Army, he left his books to the trustees at Gilkes Street, to be presented at their discretion to successful candidates at the Connexional Local Preachers Examination, such candidates to have been scholars in the Gilkes Street School.

An officer at the hospital, where he was taken and eventually died, writes of his cheery optimism, and tells that he won the love of many of the men. The chaplain wrote speaking of his patience and fortitude in suffering: “His life was truly a model and his desire and determination to serve the Christ he had chosen marked him a thorough Christian.”

His internment was attended by fellow prisoners, four of his own battalion. Bobby Rider was very much loved, and he will not soon be forgotten by his comrades in his church at home. He was a charming lad, winning love on every side.