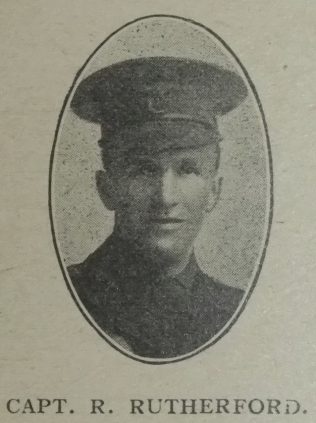 Captain Robert Rutherford was only twenty-seven years old when he fell in the battle of the Somme on September 15th, 1916. Born into a Primitive Methodist home, he was a life member of our Church at Seaton Delaval. With fine scholastic attainments he seemed destined for great things in the teaching profession until the call for military service became imperative. His chivalrous soul gave immediate response, and he rose rapidly to the rank of Captain. His personality was distinctive. With a strong sense of justice and honour he was always foremost in the defence of the right. His intelligence, kindliness and chivalry were distinctive, and made him an excellent friend and a true man. In all work he was earnest and enthusiastic, but the Church received his best. He was Organist for thirteen years, and although much was spent on his training, he never accepted a penny for his services. A real musician, his contribution to our praise service was of the highest order. A crowd of people gathered to pay homage to his character at the Memorial Service held in our Church. His father, mother, brother, and sister are still with us, and his grandfather – over eighty! We give them our sympathy.