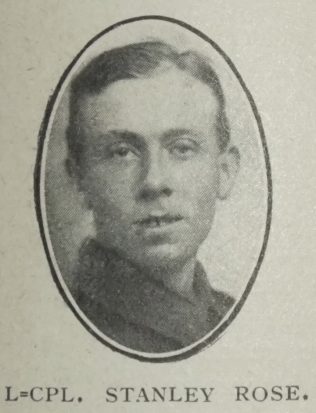 Stanley Percy Rose was born in June, 1895, and had been for the seven years previous to his death connected with our Church, having made his home with his brother, the Rev. R. Rose, of Warrington. Before joining the Army in May 1916, he was driver of the main haulage engine at the Norchard Colliery, Lydney. As a local preacher he served Churches of several denominations with marked efficiency, and in September 1915, was unanimously recommended for ministry by the Lydney Circuit. He passed the district test in October, and gained a splendid report for his trial sermon, preached at Cardiff.

While at the Letherland Camp, Liverpool, he was recommended for a commission, and was accordingly sent to France for two months’ active service. On May 14th last – the week of his expected return to join the Cadet School – he was missing. On 20th July his body was found in a trench near Bullecourt, and near the church of that place he lies buried. In duty’s cause he gave his life.

Stanley was L/Corporal 43617 in the Royal Welsh Fusiliers, 1st Battalion.