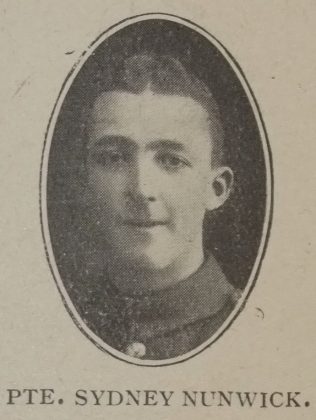 The Bridge Street Church has suffered the loss of another of its most promising young men, in the death of Private Sydney Nunwick, who died of wounds in France on April 6th, 1918. From childhood he was brought up in the Church and Sunday school. He served as a teacher in the Primary. And at the time of his enlistment in the Army he was the secretary of the Intermediate Department. He took great pleasure in rendering any service to the Church. He was a bright, intelligent, noble-minded, Christian youth. All who knew him were deeply impressed by his constant cheeriness and transparency of Christian character. His life abounded with high hopefulness, and his tragic “home-going” at the age of nineteen is a great blow to his parents, who are in fellowship with our Church. The prayerful sympathy of our people was beautifully expressed to the family at the largely-attended memorial service conducted by the Rev. C. Moore, on Sunday evening, April 28th.

Sydney was Private 90907 in the King’s (Liverpool Regiment), 13th Battalion.