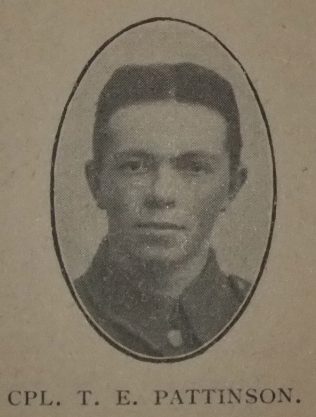 Weardale has given some of its choicest young men to the Army, and one of the best was Ernest Pattinson, who was killed on September 26th, while advancing against German positions near Ypres.

He was the eldest son of Mr. and Mrs Wm. Pattinson, of Wearhead. He had, by hard work, won his way through the Elementary School and Grammar School to the College at Sunderland, and was a student in the college when war broke out. Being a Territorial, he was for a time attached to the 7th Durhams, but, on going to France, he was transferred to the 4th Leicesters, was promoted to corporal, and placed in charge of a Lewis gun.

Many letters have reached his family from comrades and friends, all bearing testimony to his splendid Christian character. In the Army he had bravely witnessed to his Lord. At home, in his native village, he is much missed, nut his influence abides. His passing is a great blow to the Church, and for the grief-stricken parents the greatest sympathy is felt.

Ernest was Corporal 202218 in the Leicestershire Regiment, 2/4th Battalion. He was formerly 1944 in the Durham Light Infantry. He was killed in action on 26 September 1917.