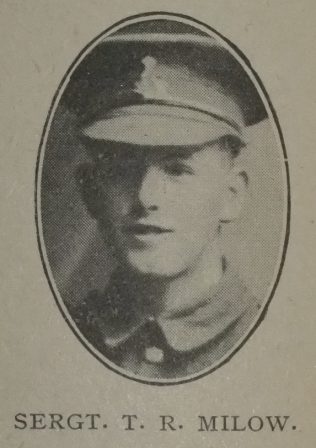 Sergt. T. R. Milow, the eldest son of our Society Steward at Seamer, Scarborough I. Circuit, was killed in action whilst holding an advanced post of great importance, in France, in the summer of 1917.

From childhood he has been in the Church, as scholar, teacher, member, and Assistant Society Steward. In many ways he rendered faithful service to our little village cause.

He showed many signs of promise when a lad at school, and possessing a fine disposition, it is not surprising that he rapidly rose in the Army to be made Sergeant in the field, and would, if spared, doubtless have risen still higher in the service. His officers spoke in the highest terms of him, and this is a great comfort to his stricken parents.

The greatest respect to this village lad was manifest in the largely-attended memorial service at Seamer. Though held on a week-night, the chapel was nearly full of all sections of the community. He was a loving son and a good soldier of Jesus Christ.

Thomas was L/Sergeant 241106 in Alexandra, Princess of Wales’s Own (Yorkshire Regiment), 5th Battalion. He was killed in action on 26 June 1917.

Before the war, Thomas worked as a cowman on a farm.