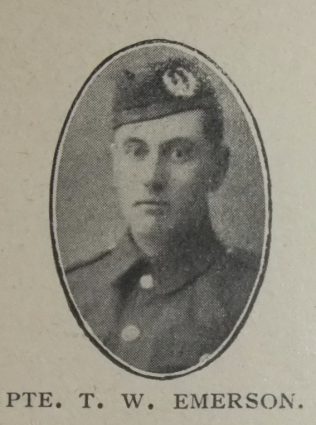 Lanehead Church has lost one of its choicest spirits in the death, in France, of Thos. W. Emerson. Joining the Church when quite a boy, he became one of its most active workers. He was organist and Sunday school teacher when the call of his country claimed him. His love for the Sunday school was passionate. When working away from home, he has frequently cycled nearly twenty miles on a Sunday morning, purposely to meet his class in Sunday school.

He joined the Scottish Rifles two years ago, and was sent to France, taking part in some of the severest fighting, and was killed on April 5th, while stretcher bearing. His officers pay loving tribute to his fine, upstanding character, one of them saying: “He was killed while serving others.” Cheerful and sunny in temperament, he was greatly loved, and will be much missed by the Church and Sunday school; but to his crippled, widowed mother and sister the loss is tragic and irreparable.

Before the war, Thomas worked as a shop assistant.