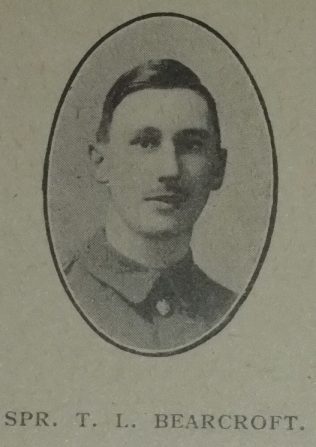 Amongst the young men of promise on the Eston Circuit few were so richly dowered as Thomas Leng Bearcroft, the only son of Mr. and Mrs. M. W. Bearcroft. As a lad he was very studious. When sixteen he commenced to preach. So impressed was the circuit with the rich promise of his life that he was recommended as a candidate for the ministry. In November 1915, he responded to his country’s call for volunteers. Though his every instinct was against war, he could not refuse the call of duty. His inclinations would have sent him to ministerial college, but his conscience sent him into the Royal Engineers. Drafted to Mesopotamia in the summer of 1916, he struggled for a time against the fearful climatic conditions, but eventually succumbed to malarial fever.

To him there was no sting in death. His beautiful letters show that he had but passed out of the realm of the things that fade.

Thomas was born in Normanby, Yorkshire and prior to volunteering had lived at Belle Vue, Eston, Yorkshire