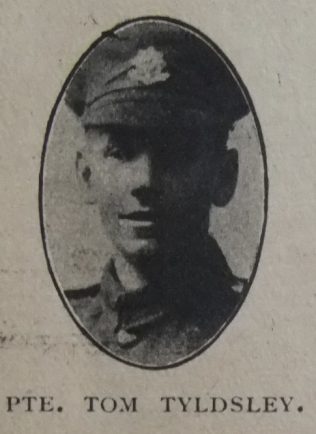 Private Tom Tyldsley, the eldest son of Mr. and Mrs. D. Tyldsley, was called upon to make the great sacrifice in France on April 9th, 1918. From his earliest days he had been a scholar in our Queen Street School, Farnworth, and later joined as a member. He was ever actively engaged in the work of our school and choir. He was one of the brightest youths we have ever met, with fine, open face, radiant smile, and unfailing courtesy. When called to the colours, he responded in the true spirit of chivalry and duty, and was much beloved by his comrades because of his cheerfulness. At the early age of nineteen, his work on earth ended. He was a loyal friend and dutiful son. The family, who are devoted members – his father being the secretary of our trust – received many expressions of sympathy. April 9th, 1918, will be long remembered by the members of our church as the day when two of our most promising young men entered into higher service.