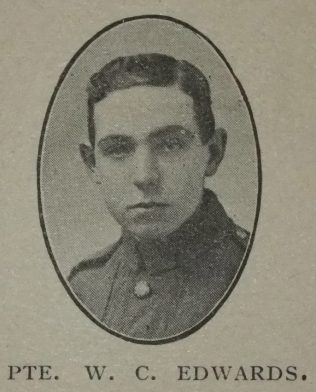 Pte. W.C. Edwards, the only son of Mr. and Mrs. W. Edwards, was severely wounded in France on October 25th, 1918, and died the same evening without regaining consciousness. From his earliest years he had been associated with Dalling Road School and Church, Hammersmith Circuit. Though only twenty years of age, he was one of our most earnest and devoted workers. As teacher, Endeavourer, and Missionary Secretary he rendered splendid service. When seventeen he commenced to preach, and gave promise of great usefulness in that capacity; in fact, he hoped to offer himself as a candidate for our ministry. He had a bright, sunny disposition, was a lovable soul, and always ready and willing for any service in the cause of the Saviour he loved. In his last letter to his mother he said, “Remember, whatever happens I am in his hands.” We miss him in the School, the C.E. and the Church, but we thank God his brief life of twenty years was not lived in vain. His memory will be cherished for many a year to come.

Walter was Private 51043 in the Worcestershire Regiment, 1/8th Battalion.