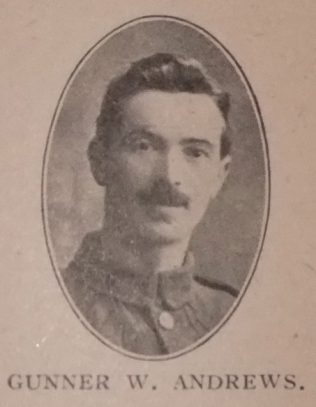 On November 4th, 1918, Gunner Wilfred Andrews, at the age of twenty-seven, died of influenza in a French hospital while on active service. He will be greatly missed in the Southampton I. Circuit, where he was a respected official and local preacher. Our Shirley Church will especially realise his loss, for he was president of the C.E., and assistant society steward. For some time before removing to Southampton he was a member in the Andover Circuit, where he had won the confidence and esteem of all who knew him.

During the four years he spent in the Army his faith had not wavered nor his zeal for the Master waned. He was looking forward to the time of his return to his home, and the church he so much loved, but this was not to be, for his Lord had called him to service above.

Wilfred worked as a domestic gardener before the war. He married Frances Eva Prior (b1890) in early 1916.