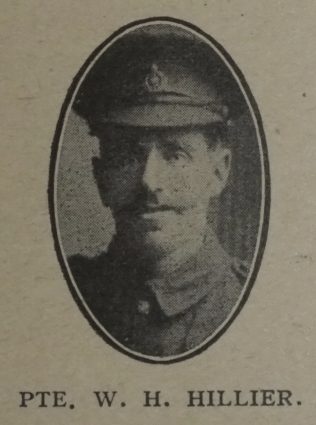 Wilfred Herbert Hillier, of Chandlersford, Southampton Second Circuit was killed in France, October 7th, 1916, while trying to aid a wounded officer. For several years he was Organist and Choirmaster, school and Band of Hope secretary, and society steward. To honour his memory, and to express sympathy with his parents and relatives, the congregation and Sunday school – led by Mr. and Mrs. T.H. Hill – have placed a clock and inscribed tablet on the walls of the Chapel, near where he used to lead the worship of song. Advantage was taken of the presence of Rev. J.G. Bowran to have the unveiling of this memorial on Saturday night, March 10th. Rev W. Sawyer presided.

Before the war, Wilfred worked as a brickyard labourer.

Wilfred was Private 29663 in the Hampshire Regiment, 15th (Service) Battalion.

Follow this link to find out more about him.