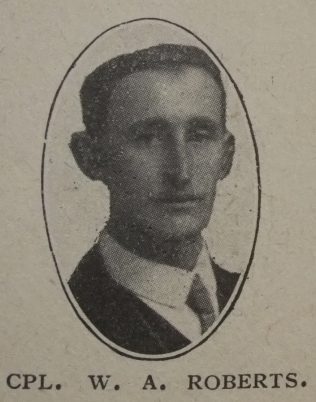 At the age of thirty-three years, on March 22nd, 1918, Corporal W. A. Roberts (Acting – Quartermaster – Sergeant) made the supreme sacrifice on the Western Front. The devoted son of Mr. and Mrs. Roberts, J.P., C.C., of Monaughty Poeth, he served the Church of his parents with great ability and loyalty. He filled many offices with marked distinction, but none better than the pulpit which he occupied nearly every Sunday, and where he preached sermons of remarkable power, and with far reaching effects. Educated at Bourne College, he was possessed of great mental powers, and the culture of his mind was only equalled by the culture of his soul. We know that though our friend sleeps in the cemetery at Drametre, Flanders, his spirit lives in the light of God’s new and eternal day. For the bereaved family – the widow and three fatherless children – we earnestly pray: and extend to them our deepest sympathy. An impressive memorial service was conducted by the Revs. J.H. Veal and Ezra E.W. Ramm in our Broad Street Church, on May 12th.

William was Corporal M2/147932 in the Royal Army Service Corps.