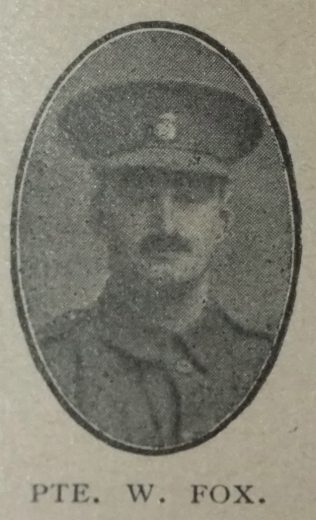 Pte. William Fox, a member of the Queensferry C.E. Society, Buckley Circuit, was born twenty-six years ago last September. On March 5th, 1916, he received his death wound from the gun of a German sniper, and after hovering between life and death for five days his spirit passed to the peace and calm of heaven. His mortal remains are buried in a British cemetery in France, and when the war ceases his loved ones hope to make a pilgrimage to that consecrated spot. During a visit of Rev. Danzy Sheen to the Buckley Tabernacle our friend, as a lad, surrendered to Jesus Christ. He joined the Army twelve months last December. A memorial service was conducted by the write in the Queensferry Church.

Before the war, William was an ironworker.