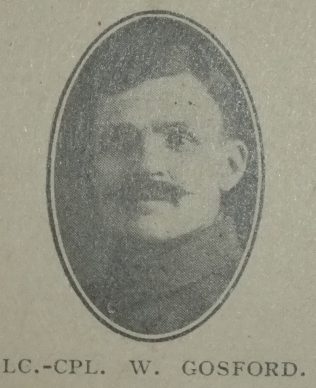 William G Gosford was reared in a Christian home, his parents being workers in our church at Norbiton. He early gave himself heartily to Christ, and became a worker, along with all the members of his family. He used his excellent voice in the choir, became a Sunday school teacher, and was deeply interested in the C.E. he married Miss Plumridge, a fellow-worker. The War brought a call, and he enlisted in the Mechanical Transport Army Service. He was eventually sent to Salonica. He fell victim to dysentery, and died on September 3rd in his thirty-ninth year. Doctor, chaplain, and captain all felt constrained to write telling of his peaceful end.

Before the war, William worked as a wheelwright. He married Rosa Jane Plumbridge in the summer of 1901 at Kingston, Surrey.

William was Private M2/166927 in the Royal Army Service Corps.

Note: Until 1961, lance corporal was only an appointment rather than a rank, given to privates who were acting NCOs, and could be taken away by the soldier’s commanding officer.