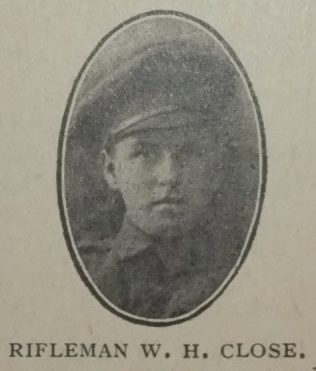 The effects of the great War are felt everywhere. But in our homes and churches its most painful effects are felt. We are losing many of our brightest and most promising young men. Rifleman W. H. Close was – before the War- one of the least likely to join the fighting forces. He was so quiet and unassuming. But when the call came he enlisted.

He joined the Army in November, 1915, and after six months training he was sent to France. He took part in the great offensive on the Somme, and was killed in action on September 15th, 1916, at the early age of twenty-one.

At the time of his enlistment he was assistant organist at our Rosa Street Church Spennymoor.

He looked forward to the time when he would return and fill his accustomed place, nut this was not to be. He has been called to the higher service, and to join in the “new song.”