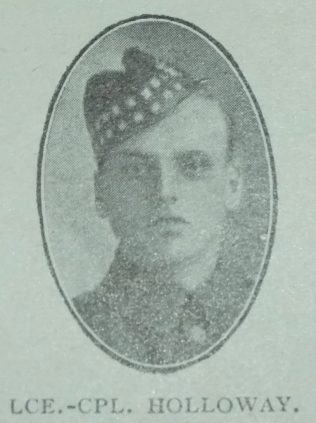 Lance-Corporal W.H. Holloway, the son of Martin Holloway, of Whitehaven, belonged to a family which has a long association with our Church. Father and son were brought up in our Howgill Street School. His grandmother is a member of over fifty years standing, and the whole family are generous supporters of our Church. He joined the Seaforth Highlanders in February, 1915, and was in one of the big battles in France on September 25th. In January last the War Office sent a message that he had been killed in action in the Persian Gulf. The news came with added sorrow, for the mother of the home had died three days previously. He has a brother with the Forces. William Holloway was a fine, promising young man, with a smile and a cheery word for all. He leaves behind him a large circle of friends who revere his memory. A memorial service was held in our church, conducted by Rev. E. Campbell.

William was L/Corporal S/7583 in the Seaforth Highlanders (Ross-shire Buffs, the Duke of Albany’s), 1st Battalion. He was killed in action on 7 January 1916.

Before the war, William trained as a joiner and cabinet maker.