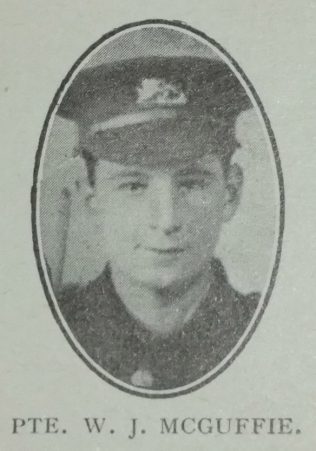 Private William J. McGuffie, the son of John McGuffie, jun., society steward and class leader in out Whitehaven Church joined the 8th King’s Own in August last. A letter from his lieutenant to his parents dated 7th March, 1916, conveyed the sad news that he had been killed in action on the Thursday previous. He says in that letter: “I knew your son to be a good soldier, liked by his comrades, and a good man for work, and I am sorry to have lost him.” His name was on the Roll of Honour of our Church, of which his parents are old and respected workers. His grandfather was an old and faithful local preacher with us. Private McGuffie, like his father, was an ardent temperance advocate. He was a young man of good ability, and an earnest Christian worker. Numerous letters of condolence have been received by his parents, testifying to his good character and Christian work. The sympathy of the church and numerous friends shows the esteem in which he was held by all who knew him.

William was Private 20394 in the King’s Own (Royal Lancaster Regiment), 8th Battalion. He was killed in action on 2 March 1916.

Before the war, William trained as a joiner.