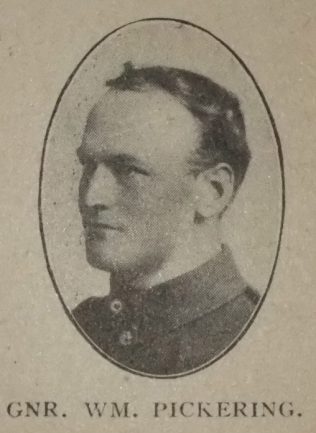 Gunner William Pickering, of Birtley, in the Chester-le-Street Circuit, was killed whilst operating in a tank charge near to Cambrai just before the Armistice was signed. He was born at Plawsworth, but during the whole of his life he lived at Birtley, and was closely connected with our Church and Sunday school. He was blessed with a powerful body, which was a frame enclosing a strong mind and a beautiful spirit. His love of literature, music and art was a passion, and while he worked at his craft as a stonemason, he pursued his studies assiduously. His fine voice was at the service of every good cause, and during his training for the Army he conducted a remarkable choir of soldiers and civilians at Irvine, and delighted his comrades in Y.M.C.A. concerts. When he was stationed at Wareham, he went to call upon Thomas Hardy, his favourite author, and was overwhelmed with joy at the gracious reception he received. His library was one of the most select to be found in the home of an artisan.

The memorial service conducted in the Birtley Church was attended by a great host of friends whose hearts had been enriched by his companionship, and whose sympathy for his father and mother, his wife and brothers and sisters was deep and sincere.