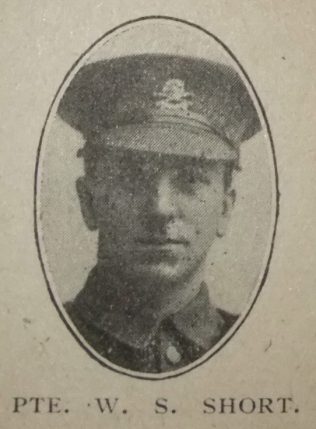 The Paradise Row Church, Stockton-on-Tees, is indeed impoverished by the death of Mr. William Sanderson Short. He joined the 5th Lancers, and was reported missing on March 25th, 1918. The news has just come from the War Office that death must be presumed. For nearly a year hope has been cherished that in some way he might have escaped. He was one of the sons of Mr. and Mrs. John Short, so long and so well known in Stockton Primitive Methodism. He was only twenty-eight years of age, but he had crowded into his life the most varied and valued Christian service. He was one of the young officials upon whom the future of the Church seemed to depend. In the Sunday school and in the Christian Endeavour, especially, he took the greatest interest. He leaves a widow and a little one, to whom, with his parents, every sympathy has been extended.

William was Private 12029 in the Household Cavalry and Cavalry of the Line, Corps of Lancers, 5th Lancers (Royal Irish).