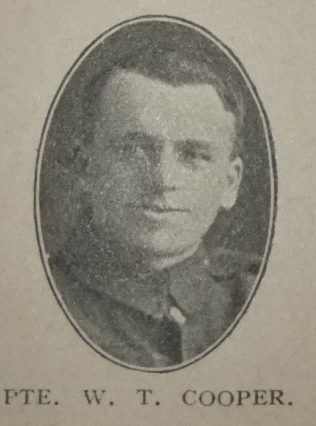 By the death in France of Private W.T. Cooper, Henshaw Street Church, Oldham, has suffered an exceedingly heavy loss. Reported “missing” as long ago as the autumn of 1917, his friends for more than a year and a half refused to abandon hope.

A more sunny and radiant Christian never lived than our departed brother. As a local preacher, Sunday school superintendent and an ardent worker in the C.E. Society, he rendered invaluable service. Though his body wore Khaki, his soul was joyously clad in the livery of the King of kings. Everywhere his radiant witness to the reality and value of divine grace was un hesitatingly borne. Had he been spared, Mr Cooper would have entered our ministry. On the morning of Sunday, June 1st, a tender tribute to his character and worth was paid by the writer in Henshaw Street Church.