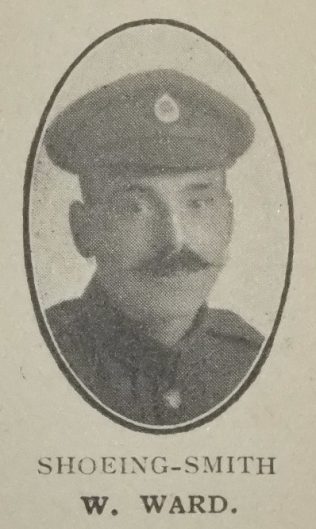 Great regret was manifested in Thirsk and district when Shoeing-Smith Wm. Ward, youngest son of Mr John Ward, one of our most respected local preachers and officials, was killed in action in France on August 21st 1918. He joined the army in September, 1914, and when stationed at Scarborough gave his life to Jesus Christ. He served over two years in France, and was anticipating a visit home when he was called to the Homeland above in his twenty-ninth year. He was bright, cheerful and kindly. He was associated with our church in Thirsk, and was a member of the choir. He was a great favourite with all who knew him, and his lieutenant wrote that he was a good soldier and most trustworthy. Much sympathy has been expressed with the father and mother of our departed friend. A largely attended memorial service was conducted by the minister. He was a good soldier of Jesus Christ.

William had the rank Shoeing-Smith in the Household Cavalry and Cavalry of the Line. He was in the 18th (Queen Marys Own Royal) Hussars; No. 25536