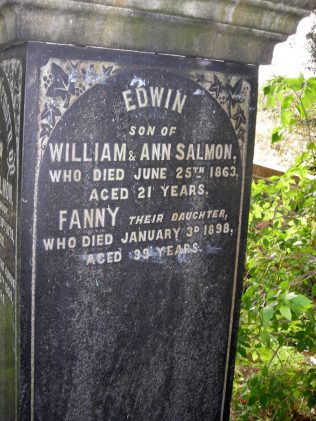 Born at Englesea Brook, in the Tunstall circuit on 17 September 1841, Edwin was the son of William and Ann Salmon. He died at Englesea Brook 25 June 1863.  His mother Ann, was the daughter of James Bourne, and Hugh Bourne, Edwin’s great uncle, often stayed with the family at Manor Farm, Englesea Brook.

Edwin was ‘of a mild disposition’ as a child, and gave little trouble to his parents. ‘He was passionately fond of music, and, but for parental restraint, he might have been allured from the paths of virtue, but his feet were preserved. Eventually this passion was in some measure gratified by his taking part in the service of song in the sanctuary of the Lord, in which he felt a great delight.’

He had piano lessons and liked playing ‘simple airs and national songs’, until ‘his heart became changed … and he would play and sing only the songs of Zion. When our family group were all assembled together on Sabbath evenings, and we sang those songs, what thrills of pleasure ran through each breast, how good we felt it to be there.’

He had ‘the rudiments of a plain English education’.

He attended Englesea Brook PM Chapel and Sunday School from an early age, ‘and to them he was strongly attached’.  He became a Sunday School teacher.

‘At a camp meeting held at Englesea Brook, in August 1858, or at the lovefeast following it, he became dedicated to serve God.’  He became a member of the PM society, but did not obtain true freedom until November 1858, when he went with two friends, T Brassington and T Henshall, to Hanley or Newcastle to hear Rev James Caughey preach. That gave him the boldness to say what God had done for him.

The three friends started going from house to house warning sinners to flee from the wrath to come, and inviting them to attend ‘the house of God’.  They visited the sick and held open air mission services, which led to a revival at Englesea Brook early in 1859.  The mission lasted 11 weeks with services every night. ‘Like fire it ran. The chapel was crowded, sinners were convinced and converted; many came from a distance, some to hear and see, and some to help.’

‘The introduction of these young converts into the Church was like the infusion of a new element, and the application of a fresh live coal from the altar, to the flickering embers.’  On Sunday mornings in the Sunday School (‘SabbathSchool’), ‘many were so fully baptised with the Spirit that the duties could scarcely be ended before prayer was begun.’ Half an hour was usually spent in prayer, and then one of the teachers would give an address. There was no shortage of Sunday School teachers, or pupils. The revival spread to a place nearby, and four of those converted are now local preachers.

Edwin and his friends also went to a village in the Sandbach circuit where the cause was ‘very low’, and ‘a great revival ensued, nearly forty were added to the Church.’

After working during the day, Edwin would go to places six or eight miles away, to take services, and return home at midnight or later, ‘wearied and faint’.

He was frequently the first to rise in his own home on Sunday mornings, and read the Bible and pray.  ‘A public prayer meeting was established at the chapel on the Lord’s day mornings, which he always attended.’ And he often went without breakfast.

He was put on the Tunstall circuit plan in June 1861. He was ‘but a stripling in person’, but wielded mighty weapons in prayer and in the pulpit.

‘There were about him an amiability of disposition, a blandness of manner, a sincerity of intent, and an honesty of mind, which made him many friends. He was in person slender, and of delicate appearance, in manner grave, unassuming but earnest.’

For some time before his death he became more studious and retiring than before. The doctor considered ‘his brain and nervous energies had been overworked, and when fierce disease came, resistance was too feeble. But he had done his work in the day, and now he had no regrets… But, we doubt not, had he been consulted, he would have liked to live a little longer, to do a little more of that work he so much loved.’

‘He had generally walked to his appointments, though I had repeatedly requested him to take my horse.’  But he usually went with another local preacher, and his friend had some scruples about riding to an appointment, and Edwin wouldn’t ride while his friend walked to the same place.  To overcome this difficulty, his father, also a local preacher, had requested that all three might be planned on the same road where possible, ‘and the comfort of being conveyed home at night, without the labour of walking, was acknowledged’.

‘Edwin had requested an appointment for himself and companion at Biddulph Moor, a place some 14 miles away, having a desire to spend a day amongst a people who were reported to him as being simple, zealous, earnest, and lively in their worship and exercises.’ But he was not to take it.

On 7 June he went to Tunstall to attend a class and preach in the chapel. He preached nearby in the afternoon, but felt too unwell to preach in the evening. The doctor said he had a ‘slow bilious fever’. He died on 25 June.

‘On the 29th, at two o’clock, the teachers and leaders connected with the Sabbath school, part of the girls being attired in white, as a mark of respect for their departed friends, met his remains at the gate leading to his home, and preceded the funeral procession to the chapel, where the usual ceremonies were performed by the Rev W Wright. They then proceeded to the cemetery, where his remains were deposited in a vault adjoining that in which rest the remains of the late Hugh Bourne. Many people attended to witness the ceremony, many tears were shed, and the church mourned for him many days. On the evening of Tuesday, July 7th, to improve his death, a powerful and impressive sermon was preached in the chapel by his highly esteemed, and much respected friend Mr Wright … to a crowded and deeply affected congregation. Very many remained in the prayer meeting afterwards, and eight persons professed to receive the blessing of pardon. To God be all the praise, for ever and ever. Amen’