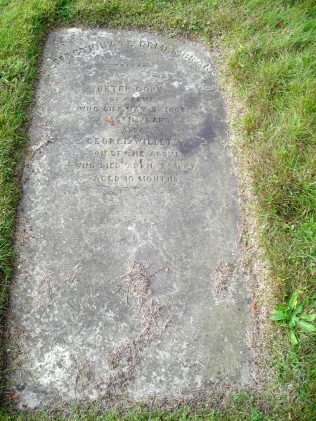 ‘Peter Cork … was born in the beautiful village of Betley’, Staffordshire, January 24, 1827.

His parents were poor – chiefly in consequence of the intemperate habits of his father, who, had he not been addicted to such habits, would have been a respectable tradesman…. [he] soon fell a victim to them, leaving a widow, and eight children; and in five months afterwards, in giving birth to twins, that widowed mother also died.

The eight children – the twins did not survive, were now absolute orphans … Peter, who was then about 11 years of age, was taken under the care of an uncle of his father, and …became an apprentice and learnt his trade.’

Now living at Burland, he began to attend the PM Sunday School, and while listening to a sermon preached in Burland Chapel he received through faith an assurance that he was a child of God. He was then not more than 13 years of age, ‘and hence he was preserved from the sins of youth’.

‘After giving proof of the reality of his conversion, his name was placed on the plan of the Nantwich and Crewe circuit – then called Burland circuit – and while yet a youth, wearing a cap and round jacket, he might have been seen, some 24 years ago, preaching with the greatest earnestness, the Word of Life to listening multitudes; and many, by the grace of God, were converted through his agency, and will, we trust, meet him in heaven.

After growing to man’s estate, and duly serving his apprenticeship, he returned to Betley where he continued with his brother, as a journeyman; and laboured with great acceptability as a local preacher, in Newcastle circuit, for a year and nine months. He then removed and commenced business, about 19 years ago, in the town of Crewe, as a tailor and draper.’

‘Some time after this, he was united in marriage to Miss Ann Willett, who now, with her seven fatherless children, thousands of miles from their native land, laments her loss.

Our brother almost saw the rise of Crewe, and of our cause in that now important and rapidly increasing town… helping to fight the cause of Primitive Methodism up to its present somewhat powerful position.

In this town we have now between two and three hundred members and two beautiful chapels, one of which, Heath Street, (of which brother Cork was an active trustee) is capable of accommodating upwards of a thousand people.

For 25 years he zealously laboured as a local preacher.’ He was also a class leader, Sunday School worker, Choir member, and Circuit Secretary.

‘For more than two years he had been seriously contemplating emigrating to Wisconsin, USA.’  May was fixed as the time to go, and he secured passages for himself and his family, and a number of others who were to accompany them.  He ‘then proceeded to sell his house, shop, stock, and furniture.’

On Monday 29 April 1867, ‘at a large public meeting of at least 500 persons, in the town hall, at the close of a tea party, an address prepared and read by Mr T Bateman was presented to him; and also a gold watch, purchased by subscription, was presented to him’.

‘Arrangements were made for the party to sail from Liverpool, in the steamship ‘City of Boston’, on Wednesday 8 May; but on the evening of Wednesday 1 May, he was taken dangerously ill, and, in 30 short hours, instead of having to cross the Atlantic, he crossed the gurgling tide of death’s cold flood’.

His death on Friday 3 May, at the house of Mr J Allman, was from an inflammation of the liver and bowels, which caused intense suffering. ‘The excitement caused in Crewe and the vicinity, by his illness and death was intense.’

‘His funeral took place on Sunday, 5 May, and as the solemn procession, consisting of about 40 conveyances, moved slowly from the house of the kind friends … the streets were crowded by thousands of spectators … and besides those who occupied the conveyances amounting to about 300 persons, some hundreds of others accompanied the procession, all the way from Crewe to Englesea Brook, a distance of near five miles’.

There ‘in the beautiful little cemetery’ he ‘calmly reposes not far from the side of a romantic Cheshire brook, and only a few yards from where rest in hope the ashes of the venerable Bourne.’

His ‘bereft widow and seven children’ are now in ‘far distant Wisconsin’.