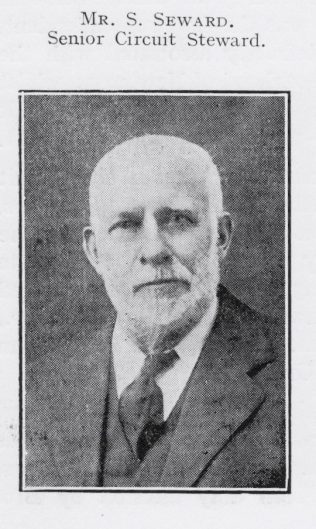 zoom
The Brinkworth & Swindon District Synod's Souvenir Handbook 1932
"Especially is the Circuit indebted to Bro. Samuel Seward for the faithful and most generous manner in which he has borne the office of Senior Steward during the last 23 years. In more recent years he has been ably assisted by Bro. H.M. Drewett."

The death of Mr. Samuel Seward, of “Longmead,” Howard-road, Newbury, which took place on Tuesday morning, will be regretted not only by his many friends in Newbury, but by country folk in the surrounding villages in the Methodist circuit, where for over 60 years he filled engagements as a local preacher.

Dr. Seward would have been 81 years of age on the 9th February. He carried his years well, for he was active to the last. It is only six months ago that he gave up driving a motor car. He learned to drive when he was 69, and drove the same car for eleven years without any trouble. He used it mainly for getting to the village churches for his preaching appointments, but he was always ready to take anyone else in need of a lift.

Despite his age his eyesight was remarkably good and he could read a newspaper without glasses. His only handicap was deafness, which had persisted for some years. He was walking about the town only last Thursday, was taken ill the same evening and removed to St John’s Nursing Home next day. Three operations were performed, and he passed away on Tuesday morning.

Samuel Seward was born at Ashford Hill. He began life on a farm, and so great an impression did these distant days of sheer hard and honest toil make upon his mind that he frequently recalled them, in fact, when in the nursing home this week he was reminiscent of the time when he was a “farmer’s boy.” They were spoken of as the “good old days,” he used to say, but he preferred the present, although he would add it was not all honey now in the farming industry.

As a boy of ten, Mr Seward used to drive a team of horses, go pitching, tieing, loading and sowing, and, indeed, help with everything on the farm, from early morning until after midnight. He said that many a family of five had to live on six shillings a week, with a house provided. Given favourable weather for harvesting, they used to commence work at five in the morning. Mr. Seward had to take his team two miles to the farm, work hard through the heat of the day, and continue after dark, when the men on the ricks had lanterns to aid them in seeing where to put the sheaves. It would be half-past one next morning when he got home. His rate of pay was a farthing an hour, or fivepence a day, out of which he was expected to find his food,and there was no such thing as a half-day’s holiday. The women folk used to work with their husbands, and the help of the children was requisitioned when school hours were over. No wonder Mr. Seward gave up farm work when he was 18, at which time he had a team of five horses to look after, and was earning 5s. 6d. per week. After being mill-hand at Chamberhouse Mill for a time, he was then foreman for 11 years at West Mills, owned by the late Mr. Wallis.

Mr. Seward took over the baker’s and confectioner’s business and restaurant in Cheap-street about 47 years ago, which he ran successfully and which is now in the possession of his son, Mr. Fred Seward. For 36 years he has lived in Howard-road. His wife died in April, 1929, since when he has been cared for with unremitting attention by his housekeeper, Miss May Foster.

Mr. Seward gave a life-time of devoted service to the Methodist Church. Last September his photograph was hung in the School Hall of the Bartholomew-street Church, and beneath it appears the following record: Newbury Circuit Steward from 1908 to 1934; treasurer of the Lay Agents’ Fund (Messrs. Baker’s gift) from 1915 to the present time; trustee of the Bartholomew-street Church for 42 years; local preacher for over 60 years. Only two or three weeks ago he took the service at the Stroud Green Chapel. It is difficult to measure his contribution to his church and circuit. Ever generous, he was a leading supporter of church bazaars and other efforts, and on many occasions he has lent his meadows at Howard-road for church and circuit fees, and given a financial lead as well. Mr. Seward leaves three sons and two daughters.

The funeral takes place tomorrow (Friday), service at Methodist Church, Bartholomew-street, at 2 p.m. followed by interment in the Newtown-road Cemetery.