You are here: HomenextTopicsnextHome MissionnextGems of Thought from Gypsy Smith

Gems of Thought from Gypsy Smith 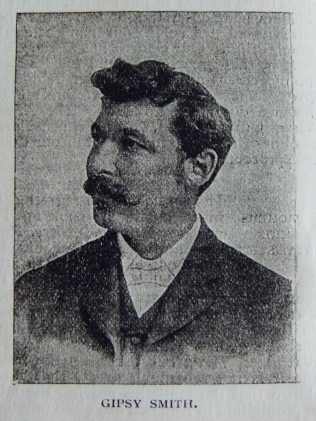 Rodney ‘Gypsy’ Smith (1860-1847) was an evangelist who conducted missions in the UK and United States. He was an early member of the Salvation Army. I have included this transcribed article from the Christian Messenger, which includes many of his sayings, in the Home Missions section as this material would have been extensively quoted in evangelistic sermons preached in the Primitive Methodist Church.

Transcription of an Article in the Christian Messenger by W.L.T.

‘Some churches caught a few fish years ago, and have been curing them ever slnce, and some are not cured yet.’

‘Launch out into the deep for the sake of the fish you can catch there; you will be a long time catching a mackerel in a bucket of tap water.’

‘If you want your children converted you will be earnest 365 days in the year.‘

‘Some of you occasionally go to a prayer-meeting, for such miracles do happen.‘

‘Many are unable to attend religious meeting in the evening because of asthma, but when there’s a concert they can go half-dress in a cab.’

‘Some church members have been Christians on and off for years, and more off than on,’

‘At election times you can go five miles after a man, and go again and again; but if you want to get him to church, you simply stand still and pull a bell.’

‘Some of you will stick to a shilling so long that the Queen’s head positively aches.’

‘Christians should give more joy and less jaw.’

‘When God measures a man for his everlasting clothes he doesn’t measure his face.‘

‘You are so near your end that you can touch your coffin-lid. Decide for Christ now.’

‘People talk a lot about the ‘Sorrows of Satan’ since Marie Corelli has dressed him up as a gentleman; but what about the sorrows of Jesus Christ? ’

‘A man who starts to live the Christian life will find before breakfast-time that there is a devil.’

‘People put flowers on their friends’ graves after death: let them smell them before they die.’

‘It’s not Christ the people hate: it’s the poor caricatures the people see around them.’

‘Ecclesiastical refrigerators are churches that don’t go in for conversions.’