You are here: HomenextTopicsnextOccupationsnextPrimitive Methodism and the Quarrymen

Primitive Methodism and the Quarrymen 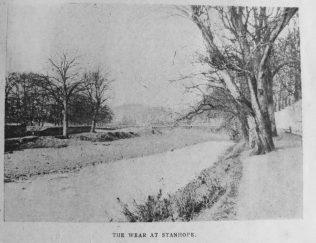 Transcription of Article in the Christian Messenger by Rev. J. Roxby

JOURNEYING from Bishop Auckland up the beautiful Wear Valley in company with two fellow travellers, who had evidently not been in the dale before, it was interesting to hear their remarks anent the beauty and charm of, to them, a newly-discovered country. The day was all that could be desired, and the dale was in its summer glory. Their feelings found expression in words similar to the following, “beautiful,” “exquisite,” “charming,” “magnificent,” and so on, and in so doing, they were expressing the sentiments of every lover of the dale.

Frosterley is soon reached and here you touch the historic Westgate Circuit. For Methodism is no new thing in the dale, its history goes back to the beginnings. John Wesley visited the dale and preached at High House and other places and formed societies. It is now nearly a hundred years since our church came to birth here, and it may truthfully be said that Methodism is in the blood of the dalesmen. It was not ever thus. When the pioneers of our Church commenced operations, the morals of the people were of a low order. Cruel sports, such as cock fighting, were indulged in, and general laxity obtained everywhere. Herein was suitable ground wherein were laid firm and strong the foundations of our Zion. Outstanding and illustrious men in our Church exercised a gracious ministry here, and their names are cherished and held in high honour, amongst whom might be mentioned the late Hugh Gilmore and Dr. John Watson, himself a dalesman, of sainted memory.

And the Dales folk! Like the hills among which they dwell, you have in them endurance, strength and faithfulness. The typical dalesman is physically strong and of sturdy independent character. The squire and parson influence here is nil. For many months of the year he lives under cold, gray skies, and may not this have something to do with his temperament? Like the Scotsman, to whom he is probably related, he is dour but kind, brusque, but tender of heart. The vagaries of the weather, which determine largely his employment, have made him thrifty and careful.

The dale is rich with mineral wealth. For years and years lead-mining was the principal industry and gave employment to a very large number of men. It is now chiefly confined to Rookhope. The staple industry to-day is quarrying – limestone and ganister, both of which are used in connection with the steel industry. To see the quarrymen at work you realise at once that it is no child’s play and only men who are inured to this type of work can do it with any degree of success. Every tool that is used in quarrying is heavy, and the work is hard, laborious and dangerous. The men work in pairs in a given panel, at times on dizzy heights, boring, blasting and breaking the stone for transport to the furnaces. Though much exposed to weather conditions; it is generally regarded as a healthy occupation.

Our churches in the dale are beautiful for situation. The visitor has no difficulty in finding them. Externally they may be a little austere, but within they are handsome and harmonious in which reverent congregations find spiritual refreshment. All the buildings are of stone and much of the stone used in the building of them was quarried and led by the then members and adherents of the Church. They built better than they knew, and a rich heritage they have left their children and children’s children. Unfortunately in our work we have to contend against a declining population, for years there has been a steady and continuous flow from the dale. Fifty years ago in the parish of Heathery Cleugh, which embraces Wearhead, Lanehead, Cowshill and Burnhope, there were one thousand eight hundred and seventy-two souls, now there are just about nine hundred, and this, with the exception of Stanhope, is general. We credential many away from us but few are received. Youth goes – the spirit of adventure leads him forth, reluctantly it may be in many cases, but it is a case of “needs must,” the choice of occupation and profession being here so limited. As we look upon the children of our Sunday-schools, we wonder who of them will remain to carry on here and who will go forth to enrich other fields of Christian service.

What Primitive Methodism has been to these hardy dalesmen it is difficult to say, but it is writ deeply in their life. Many who have left the dale and have made their homes elsewhere, have enriched the churches of our towns and cities. There are those who hold office therein in connection with our churches who gladly and proudly confess that their first instruction in holy things was received in the quiet places. Human nature I know is pretty much the same everywhere, yet here there is something different; in the dale there is very little drunkenness, little indulgence in the rougher sports, and in general the Sabbath is held in high regard – at any rate it is quietly kept. How much this is due to Methodism is difficult to say. The influence is as leaven upon the whole.

Amongst the quarrymen there are some fine types doing distinctively religious work in our churches and Sunday-schools. At the risk of being considered partial, mention might be made of the following: Messrs. T. Greenwell, D. Horn, T.E. Walton, H. Peart, J.T. Lonsdale and C.E. Fenwick, all of whom are local preachers whose pulpit ministrations would adorn any pulpit. H. Peart, silver-tongued and graceful of utterance, is in great demand far beyond the con?nes of his own Circuit. When a delegate to the Spennymoor District Meeting, he so impressed his auditors by his public utterance that on the following day he was asked in the meeting to prepare himself for the ministry, but domestic ties precluded such a course, and the circuit is the recipient of his gifts and graces. The work of a local preacher in the dale is no sinecure. It often falls to his lot to take six double appointments during the quarter, in fair weather and foul, travelling long distances at times, and health permitting, rarely fails to take his duty. The Society Stewards who work at the quarries are Messrs. J. Rutherford, G. Barkas, J. Stephenson, T. Thompson and J. Peart; they are all the product of our Church and have and are rendering distinguished and faithful service thereto. Besides serving as Stewards, they are also interested in Sunday-school work. These are all men of sterling worth and a mighty asset to the Church. J. Rutherford is slow of speech, but hear him in prayer! The tongue is loosened and he finds his way to the Holy of Holies. His name is a household word in Wearhead, and it is he and such who maintain the Church in its strength and beauty. J. Stephenson, of St. John’s Chapel, was well born of godly parents, of warm temperament and mighty in prayer. T. Thompson, of Stanhope, and J. Peart, of Lanehead, are both loyal and faithful. There are Trustees who follow the daily work of quarrying, who take great pride in the premises they hold in trust – genuine gold are they, among whom may be mentioned Wm. Moses, G. Harrison, F. Coulthard, J. Tweddle, with others. There are also private members who in a quiet, unostentatious way, bear clear witness to the truth and love of Jesus Christ. These, one and all, owe everything to Primitive Methodism, and are doing their best to keep it strong and of mighty influence in the dale. The presence of such men in public works cannot be but helpful and good.

Our knowledge of the quarrying industry and of quarrymen is strictly limited. The district being largely rural, little or no opportunity is given for civic duties, but in church life they take an alert and active part. Here in these out-posts, some fine work is done quietly and faithfully. There is no glamour or romance associated therewith, but clear witness is borne to the love and power of Jesus Christ. They are a fine type of men, not easily daunted by difficulty, serious, thoughtful and religious, amongst whom it is a delight to labour. In the circuit are also school-masters and teachers, farmers, trades-people, builders, miners and railway workers who are proud of their church and serve it to the best of their powers. Primitive Methodism has a great past in the dale, and the dalesman recounts with pride the men who have laid deep and strong the foundations of our church and those who have gone from it to share in the larger ministry of our beloved Zion, and now in spite of declining population looks to the future with hope and greets it with a smile.