You are here: HomenextTopicsnextMusicnextNew organs in Wiltshire 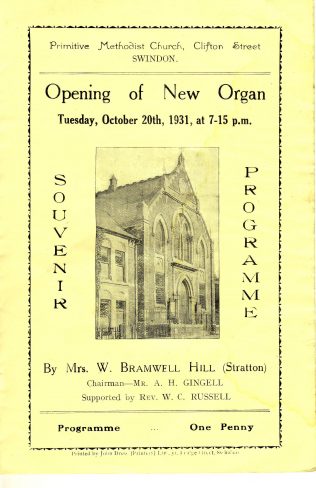 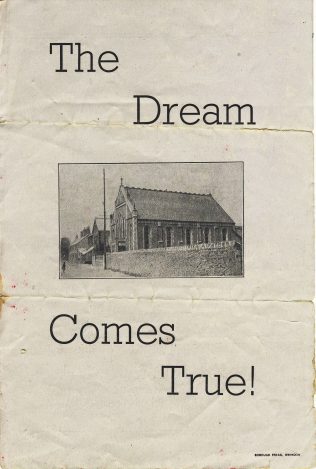 In 1931, Mrs W. Bramwell Hill (Norah Barnes before her marriage) carried out the formal opening of the new organ at Clifton Street PM Church in Swindon.  There was a full programme of entertainment, followed by a Coffee Supper, costing 1/- for adults and 8d for children.

The programme includes a full listing of all choir members and others taking part.  The organist is named as Mr L H J Fisher, with Miss Ivy Ayres and Miss Eva Lewis as his deputies.

This clearly made the Prims at nearby Lower Stratton, a village just outside Swindon, think – or was it rivalry?  They used an American organ to lead the singing and decided, at the suggestion of a Mr Cook, to celebrate the opening of the first chapel in the village in 1830 by a centenary appeal to buy a pipe organ.  The same W Bramwell-Hill (by now with a hyphen in his name) was the organ appeal fund secretary. I don’t know whether to believe it or not, but a note I have about the organ appeal says that the previous American organ was sold “for jungle research”.  Make of that what you will.

Mind you it took them until 1938 before the organ was installed and opened by Mrs Levi Cook, the oldest member who had worshipped in the former chapel and had started the organ appeal with a £1 donation.  Even then the appeal had not been as successful as it might have been.  They were still having collections for the organ fund at the opening ceremony.  The Stratton organ was built by Martin and Coate of Oxford and it wasn’t until the early 1960s that the organ was completed to its full initial specification by the original builder, by then into his 90s.

The opening recital was given by Mr Lionel Morse.  The regular organist (until the late 1950s) was Mrs W G Miller, well known for her habit of always using the trumpet stop for the third verse of every hymn, regardless of the words.

In neither Clifton Street or Lower Stratton are there any details of the actual organs.  Perhaps that is not the interesting bit.