You are here: HomenextTopicsnextMusicnextParadise Row, Stockton on Tees 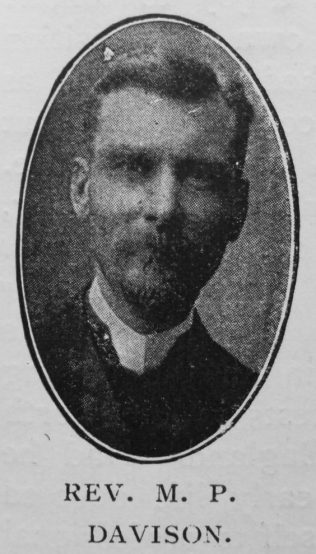 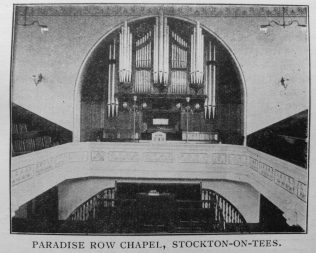 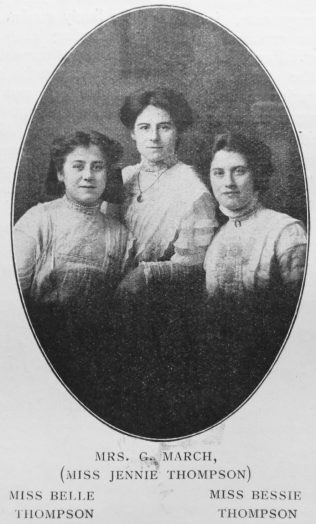 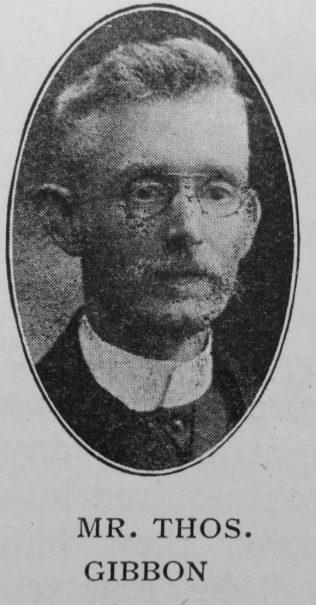 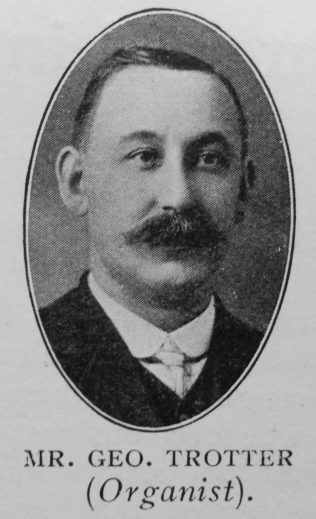 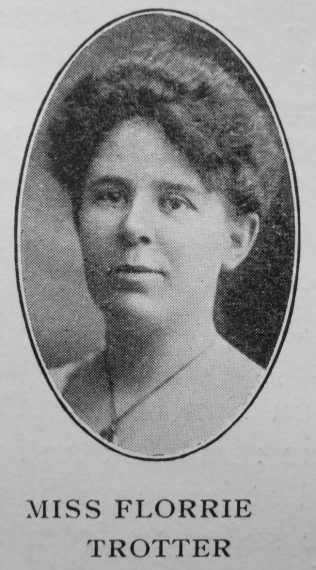 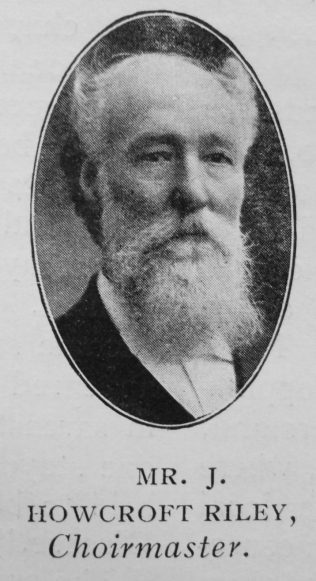 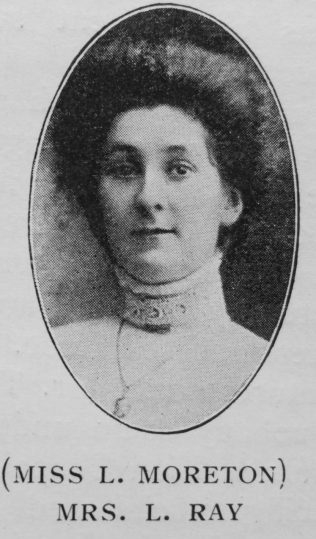 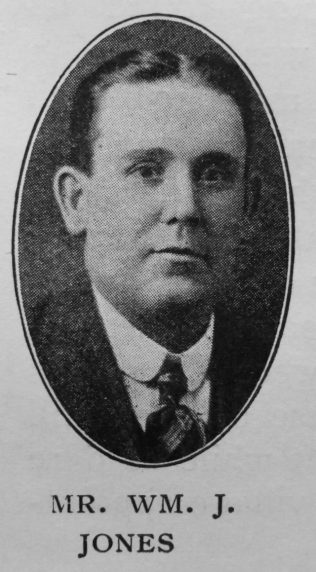 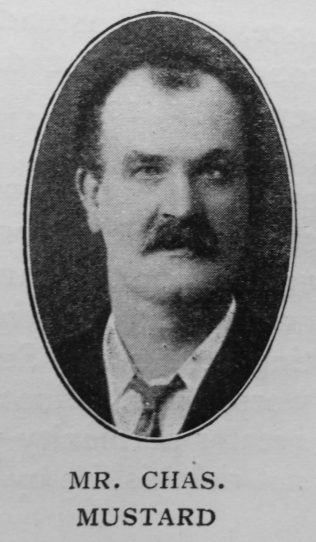 Transcription of article published in the Primitive Methodist Magazine in the series Famous Choirs by M.P. Davison

FEW chapels have gathered round them happier memories than those that cling to old Paradise Row, Stockton-on-Tees, which is regarded as the mother Church of Tees-side Primitive Methodism, at any rate, in the lower reaches of the river. Paradise Row, however, was not the first of the Stockton Chapels, for prior to its being opened in 1866, the congregation had for many years worshipped in “Ranter’s Buildings” in Maratime Street, and it was in a room in the “Green Dragon” yard that the Church came into being.

Who was the first Primitive Methodist to lift up his voice in Stockton High Street is not known, but when Samuel Laister arrived in the month of May, 1821, he found “no society”; and he declared the town to be “a cold, hard place.” We do not know anything about Mr. Laister’s musical powers but William Clowes testified that he was “all alive in his soul” and in the course of a few months he succeeded in raising a flourishing Church.

Fifty-five years ago, two brothers, Farrer and J. Howcroft Riley, joined the Maratime Street Sunday School, and in the record of Stockton Primitive Methodism their names will always have an honoured place. Mr. J. Howcroft Riley became a member of the Choir in 1857, and through life he has made this the chief sphere of his Church activity; and largely through his instrumentality, the Paradise Row Choir has become greatly admired for its efficiency and devotion.

Before Mr. Riley’s advent, however, the Stockton Primitives had already achieved a reputation for their singing. The lively strains of those days were led by a string band, but when harmoniums became fashionable it was felt that Stockton must not be behind the times. The trustees had not the requisite funds to go into the open market for an instrument, but they had amongst them an ingenious mechanic of the name of Barber, who built one in his own workshop. This was purchased for £5, and for many years it supplied the place of the string band, but whether it was any improvement upon it there is no evidence to show.

When William Lister became superintendent of the circuit his family greatly assisted in the singing services, his two sons, Josiah and Samuel, becoming harmoniumist and choir-master respectively. On their departure, in 1862 the Church. found itself in a difficulty. There was no one to play the  harmonium. John Thorman, however, manfully stepped into the vacant seat. He could only play two tunes, indeed, but what he lacked in skill he made up by diligence and devotion,

Possessing a good general knowledge of music he soon increased his repertoire, and in 1866 we find him taking a leading part in a grand concert that was got up to assist in raising funds for the purchase of a pipe organ.

By 1870 the Church had succeeded in its object. The price paid for the new organ was only £180, but it was well worth the money. Though limited in range it had a remarkably fine tone, and in recent years it was so skilfully manipulated by Mr. George Trotter that it became a great favourite with the congregation. It had, however, long been Mr. Riley’s desire to secure an instrument more in keeping with present-day  requirements, and taking advantage of an offer of assistance from Mr. Andrew Carnegie, he promised £100  towards the cost of a new organ, and set his Choir to work to raise the remainder. An order was placed with Messrs. Abbott and Smith, of Leeds, for a two-manual organ to cost £520, and by the time it was opened in April last, the whole of the money had been secured.

In order to recognise Mr. Riley’s long-continued services and generous support, it was decided to call the new instrument “The J. Howeroft Riley Organ,” and it would be difficult to think of a more fitting memorial, for it is an exquisite piece of workmanship, and admirably adapted to the needs of the Church to which Mr. Riley and his wife and family have devoted so much of their time and energy.

In the management of his Choir, Mr. Riley has succeeded in keeping together a fine combination of singers. His son-in-law, Mr. George Trotter, is the organist, and, though largely a self-taught musician, he is a highly successful executionist.  With a sure touch and fine feeling, his playing is a joy to follow. Several tunes of his own composition have not only established themselves as favourites with the congregation, but have secured a much wider audience.

Amongst the older members of the Choir, Mr. Charles Mustard deserves mention. He possesses a tenor voice of singular purity, and fine range, and has been a successful competitor in all the leading contests in the north of England. Had he in early life devoted himself to professional vocalism, Mr. Mustard would undoubtedly have made his mark in the musical world.

Mr. W.J. Jones is a baritone of quite unusual powers. His voice is rich and full, and he sings with a triumphant ease and artistic grace that have won him a high place in the estimation of musical critics, and enabled him to carry off many prizes in musical contests.

The same may be said of Miss Florrie Trotter as a soprano. She possesses a magnificent voice, and for several years she has not only been one of the chief attractions at musical services, but has been in great demand in the neighbourhood. She seldom fails to take premier honours in any competition that she may enter.

Mrs. Ray (better known as Miss Lizzie Moreton) has a fine contralto voice, and her singing, accurate and expressive, is much admired. She, too, has been a successful prize winner.

The three Thompson Sisters are highly appreciated members of the Choir. Mrs. March (Miss Jennie Thompson) is a soprano with a well-balanced voice of good quality, and as a soloist she is a great favourite. Miss Bessie Thompson is a promising soprano whose singing of light songs is exceptionally good; whilst the third sister, Miss Belle Thompson, is a fine contralto who is always welcomed as a soloist.

This list, however, by no means exhausts the Choir’s resources, for Mr. John Mankin can always be relied upon for a well-executed  tenor solo, and amongst others, Miss Lavinia Wright, soprano, and Mr. Clifford Hughes, tenor, are both rapidly developing into good singers; and the name of Mr. Thomas Gibbon must not be omitted, for he is not only an excellent bass singer, but on the occasion of musical services it is he who wields the baton.

With so generous and so enthusiastic a leader, it need scarcely be said that the Choir is ever ready to render help in the financial efforts of the Church, and this assistance is also freely given in other parts of the circuit, and, on occasion, to churches of other denominations as well. Mr. Riley, it should be added, makes a speciality of the Sunday School Anniversary singing, and his success in training the children is beyond all praise.

Altogether the Choir illustrates in a very striking way what may be done by devoted vocalists not only for the service of praise but for the Kingdom of God. It were too much to say that Paradise Row possesses a perfect or ideal choir. No such choir exists, or ever will exist this side the Millennium; it demands perfect men and women, not only in regard to their temperament and character but their gifts and acquirements. Perfect people are not yet to be found either in choirs or churches. The genius of a choirmaster is revealed in the use he can make of imperfect material, the discipline and harmony he can secure by the force of his personality and moral influence, and the steady direction of the whole to the highest ends. Wherever success is attained it means that however excellent the material he has had to deal with, the choirmaster has brought to bear upon it qualities akin to genius. It has not often happened that this has been more strikingly illustrated than in the case of Paradise Row.