You are here: HomenextTopicsnextMusicnextPickering Choir 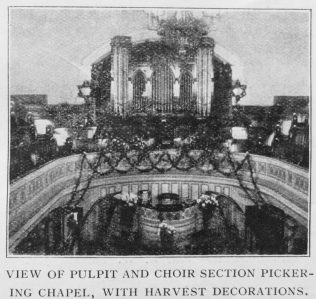 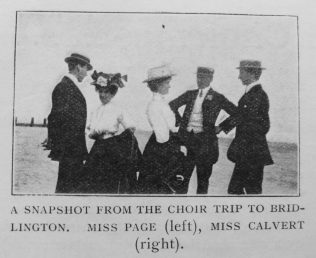 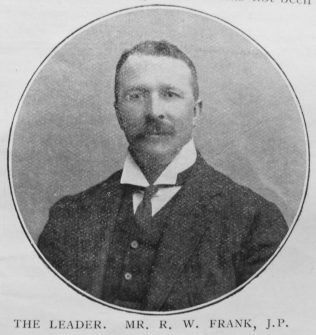 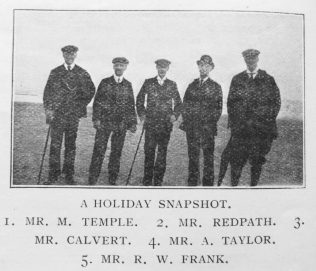 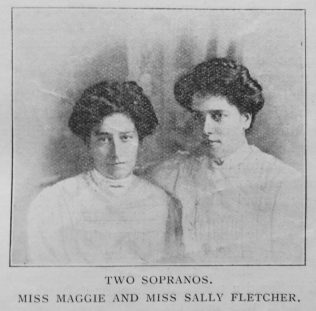 Transcription of article In the series “Our Choirs and Choirmasters” by Rev. Thomas Graham

WHEN a strange preacher visits Pickering he is usually impressed with the size of the chapel for so small a town, the magnificent Sunday evening congregation, and the efficiency of the choir. In estimating the musical contribution he might not put the Pickering contingent in direct comparison with some of the best choirs in the populous districts of the West Riding, but he would at the same time give a high certificate for intrinsic merit. If another standard of comparison were adopted, and the choir was estimated in the light of the resources of the musical abilities of the district, he might fairly reckon it a choir second to none in the Primitive Methodism of the county. In enterprise, spirit, and practical efficiency it would put to the blush not a few choirs in flourishing city churches.

The leaders of praise, about thirty in number, occupy the gallery behind the pulpit, according to the arrangement common in Yorkshire, the central background being formed by a good organ. Preacher and choir alike rejoice in the excellent accoustic properties of the building, which accommodates a congregation of about eight hundred. The choir is well organised on a joint democratic and autocratic basis. Mr. R.W. Frank is the organist and choirmaster, and, in a word, the popular head of the musical organism. He controls, but every member is expected to be thoroughly interested, and the expectation is backed by a commendable democratic freedom in offering suggestions as to choir service and the introduction of tunes. The system works well.

To say that the strong point of the Pickering choir is congregational singing is to write a commonplace, unless it be made clear that the phrase is intended to mean that, besides leading, the choir trains and develops congregational singing. Their success is conspicuous when the Sunday evening congregation rolls out “Quam  Dilecta,” to “We love the place, O God,” Dr J.B. Dykes’ beautiful tune “Almsgiving” to Wordsworth’s “O Lord of Heaven,” “Ellers” to “Abide with me,” or, to cite a less modern example, “Lydia” to one of Wesley’s hymns.

It is not surprising that conservatism marks a town that flourished before even Britons became the predominant people in these islands. In politics and music, however, liberal sentiments prevail. It is a proof of the strength of both moods that a vesper is sung at the close of the service, but the repetition of the Lord’s Prayer by the preacher is retained. Once the innovation was courageously faced, the chanting of the Prayer would undoubtedly be found not only to improve the spirit of worship but also to be very congenial to such a congregation as gathers at Pickering. It would be difficult to say whether old or new tunes go best Among the favourites may be named Abends, Jerusalem, Tottenham, Castle Rising, Theodora, Darwell, Safe Home, Aurelia, and St. Raphael, just to select from the several metres, but it is risky to make distinctions where a happy variety obtains and a steady pace is maintained in the introduction of new music. Most Primitive Methodist congregations include an element whose hearts are most stirred by the class of music common to aggressive evangelism. A preacher may be permitted to express appreciation of the choir’s hearty assistance in endeavouring to reach the musically uneducated in connection with the monthly popular service. On these occasions the best hymns and tunes in the Mission Hymnal are used. A favourite just now is “Hyfrgdol” to “I will sing the wondrous story.”

Now as to the personelle of the choir. The leader will be known to all cricketers as the captain of the second Yorkshire team. He is the son of Mr. J. Frank, J.P., the Circuit Steward and best known Primitive Methodist over a very wide area. Both are magistrates and foremost in the counsels of progressive politics. “Roberty,” as he is known in the select social circles of this unconventional district, is an old Elmfieldian. He serves the church in various ways, but music is his forte. Mr. Alf. Taylor, a deep melodious basso of medium volume, has been a helper for many years. Mr. Calvert also, who has a useful tenor voice, is one of the oldest members of the choir. For a considerable period the choir has not been without one or more members from the Fletcher family, all of whom are musical. The service of praise and the musical education of the people owe more to the members of this cultured family than can here be told. Miss Fletcher is a rich, true alto. Miss Maggie Fletcher is the leading soprano, with a volce that gives distinction to the choir, and is well supported by her younger sister, “Miss Sally” as all call her. Miss Maggie is the principal soloist over the countryside. Some time ago she found herself singing in public so frequently that she smilingly (but effectively) “struck,” lest she should become—but no confidence can be placed in her own opinion on the point. Miss Page, one of the newer members, has a magnificent alto voice, deep, powerful, and true, and is a popular soloist. Like Miss Maggie Fletcher, Mr. W. Ward belongs to the district. He is a tenor of exceptional quality, and would be an acquisition to any town. He feels he must recognise the claims upon his service from the wider community, and this necessitates exemption in his case from the rule on regular attendance. He keeps his seat and his fine voice adds appreciably to the service of song when he is present. Space forbids further personal reference to valued helpers.

The sustained assistance of the choir as a whole and the presence of member of the musical ability of those just named enable Mr. Frank to make an anthem a regular feature of the Sunday evening service. This never fails, and it is a most valuable part of the service. Among recent anthems used are, “Show me Thy way, O Lord!” by Thos. Hutchinson, “O taste and see,” by Sir John Goss, “Lift up your heads,” by John L. Hopkins, and “O worship the King,” by H. Ernest Nichol. The uniform quality of this part of the service is explained by Mr. Frank’s profession of absolute impartiality. The best, he says, are not reserved for “specials” or when “th’heead preacher” is in. After all, however, there is a shrewd suspicion that the conscious best is brought out when a local preacher comes down from the Moors to fill the pulpit. Not that the farmers and traders who occasionally occupy the pulpit need special support, for they are able and worthy men. But the thought is kindly, and illustrates the spirit of comradeship that exists between the organ stool and the pulpit.

Where shall we look for the secret of success? An experience of the writer early in his ministry clearly indicates that it is the practice room. When on the premises one evening he heard strange sounds. Not only sudden starts and stops of music, and vocal strains interspersed with conversational solos in high impressive tones, but also whistling, as from a very massive chest. And it was true! The athletic leader was whistling out the various parts, his lungs being almost equal to leading the bassos. That was the workshop where music was made. We are not allowed to tarry there, but the few minutes’ observation gives an impression of serious effort and thoroughness.

Mr. Frank sets high value upon two principles in choir organisation. The first one is of method, that of single control. The second touches the spirit of the choir. To use a simile from cricket, each should play for his side and not for himself. Harmony is the secret of success, individuality disturbs and weakens. Here are a few of his aphorisms. Soloists should be selected purely on the ground of merit. Ability admits to the choir, never favour. Never try a voice until you are quite sure the test will be passed. Never fail a candidate or a soloist. If a member suggests a tune and it can possibly be adopted, use it. The discipline of a choir depends upon little things. Punctuality should be observed at practice, especially by the leader, and practice should never exceed an hour. Keep a seat specially for recruits, and transfer to full choir by seniority. Keep the quality of music used in consonance with the efficiency of the choir, high enough but not beyond their power. Twenty good voices are better than forty moderate ones. Favouritism is fatal to a choir, keep it out.

Once a year the choir is entertained at some watering place at the generous cost of Mr. .J Frank and Mr. J. Hirst, of Scarborough. In September, upwards of fifty choristers and friends, including the resident minister and his family, spent the day at Bridlington and the evening in Scarborough. Two of our illustrations are snapshots from the sands.