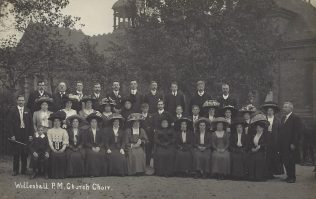 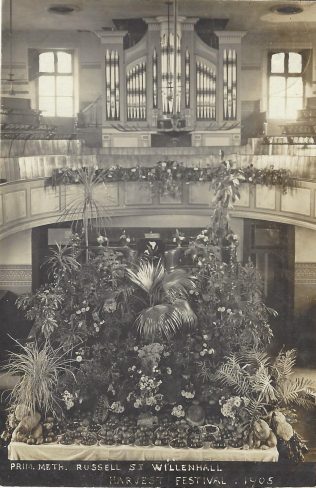 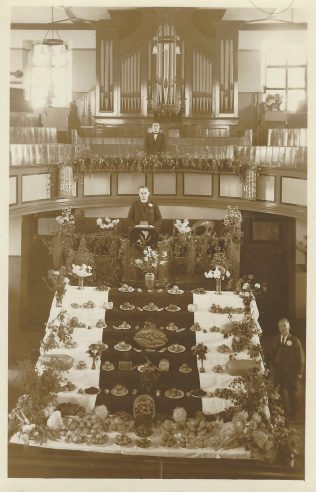 The Willenhall through the ages website explains that Primitive Methodism began in Monmer Lane, and then spread to Little London. An early Primitive Methodist Chapel stood on Chapel Green, until it was replaced by a larger building in Russell Street, which opened on 23rd March, 1850. The church was closed in the 1960s  due to the large scale demolition of the old houses in the area, as part of Willenhall’s slum clearance scheme. The last service was held on 3rd January, 1965. The church joined forces with Walsall Street Methodist Church and Union Street Wesleyan Church to form the New Trinity Methodist Church, in Union Street.

J Broadhurst writes in the Primitive Methodist magazine of February 1855 of the re-opening of Willenhall Primitive Methodist chapel after the installation of a gallery. It cost £271 of which they had raised £106. Was this Russell Street?  Although it had only been opened 5 years earlier, it was not uncommon for chapels to be enlarged relatively soon after opening as congregations grew. Good architects prepared for possible expansion.

The chapel in the article re-opened on November 5th 1854; opening sermons were preached by J. Prosser, of Brierley-hill, Dr. Nelson, of Birmingham, J. Petty, of London, and Rev. B. G. Young, Baptist. Celebrations included a tea meeting for 200, with addresses by Revs. J. Morton, W. J. Neeshan, H. Higginson and J Broadhurst.

If this re-opening account does not relate to Russell Street, there are several others to choose from at Lane Head, New Invention and Spring Bank.