Our Oldest Teacher-Evangelist in Central Africa 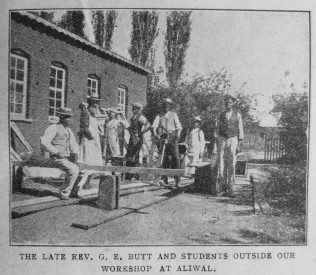 Transcription of Sketch In the Christian Messenger by Rev. Arthur Baldwin, F.R.G.S.

ALIWAL NORTH has had closest relationship with our Central African Mission from its beginning. In fact, the Mission owes its existence to our work at Aliwal North, for it was there that Monsieur F. Coillard met the Rev. J. Smith, which led to the correspondence which ultimately decided our Church to send out the Pioneer Mission Party to Central Africa.

All through his long ministry at Aliwal North, the Rev. G. E. Butt was the nearest and closest friend of the Mission, and after his superannuation carried out the long-cherished wish of paying a visit to this distant field.

Robert Moalosi is the present living link connecting these two mission areas, for he came from Aliwal North, and we are indebted to Mr. Butt for him. He found him at the French Mission Training College at Morija, Basutoland, and engaged him as second master for our Aliwal North Mission School. That was in 1892, and ever since he has been connected with our work.

He was fortunate in his birth and training. Born of Christian parents at Thaba Bosihu, a French Mission Station in Basutoland, in 1868, he received his first lessons in the school there. Whilst still a boy, however, he was sent to a relative’s near Aliwal North, and on the Rev. J. Smith commencing a native school there, he was one of the first scholars to be enrolled, and remained in regular attendance for about seven years, passing through all the standards of the school. Then he went to Qathing in Basutoland, where he was appointed assistant teacher, and served two years.

It is evident by this time that Robert had determined on the teaching profession as his life’s vocation, and to more fully equip himself he entered the fine Training College at Morija, and had been two-and-a-half years in residence when Mr. Butt discovered him.

We imagine he must have joined the church when a youth in Aliwal North, for when he came back as teacher his Christian experience was ripe enough to warrant the leaders in appointing him a Class-leader. Later he became the Choirmaster, and in both capacities rendered splendid service.

But the officials believed that a young man of his gifts and qualifications was capable of yet wider service, that he ought to be a preacher, and asked him to take a week-night appointment. He felt unequal to the task and declined. Other invitations proved no more successful. So sure, however, were the leaders of his fitness for the work that they gave him no rest until he consented, and eventually became an accredited local preacher.

His next step was the biggest of all, viz,: offering to go to the Zambesi, for at that time Central Africa was more remote and unknown to the natives in Aliwal North than to the people in England. When we were in Aliwal North preparing our expedition, we wanted drivers and leaders to accompany us to the Zambesi, but although we appealed publicly in the native church, we failed to get a single volunteer. The best we could do was to get men to engage to go as far as Khama’s Town, and of those who started only two went as far with us. It was a great triumph, therefore, for Mr. Butt when in response to his appeal Robert and another volunteered to go to the Zambesi as teacher-evangelists.

He with his wife and one child, reached Central Africa about June, 1917, and began his labours at Nkala. All was strange to him, the country, the language, the people, their habits and customs, and not least of all, much of the work. He had to revise his conception of a missionary’s life, for he had not reckoned on the many irksome tasks that come in the daily routine or the many hours of arduous manual toil that must be put in. Soon there followed the sense of loneliness and the experiences of sickness and sorrow, but there was never any talk of resigning. He has manfully stuck to his post.

He is quite a linguist, being fluent in English, Dutch, Sesuli and Ila, with some knowledge of Kaf?r. He is happiest when teaching or preaching, but has become quite pro?cient in the use of tools, and apart from the medical side, can now meet all the demands of a mission station.

At present he is in charge of Nambala, where Mr. Kerswell says he has a splendid school and is generally rendering magnificent service.

His wife, Annie, too, trained in a Christian home is a true helpmate, who manages well the affairs of her household.

May they long be spared together to continue their valuable service for Christ and His Church!