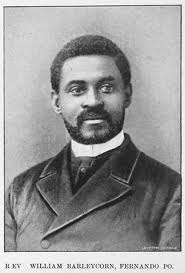 William N. Barleycorn became one of the first Members on Trial in March 1870 as a result of the services led by Rev. Henry Roe and Rev. R. W. Burnett, in the house of Mamma Job, Santa Isabel, Fernando Po. He was the brother of Hannah Barleycorn who assisted Mrs. Roe with household chores in return for lessons.

William Barleycorn was later appointed by the English Conference to be a native Missionary and much has been written about his achievements.