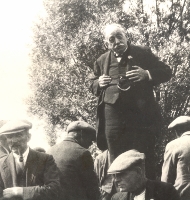 Although there are queries regarding some of the individuals listed below, making it difficult to give precise figures, it is noticeable that the majority, approximately  55%, were coal miners or had worked in collieries in other capacities; a third were from Durham or Northumberland.  About 75% worked as union officials or elected representatives at some stage of their career and over 78% had served the Connexion as local preachers or officials.  At least 68% had been local councillors or aldermen; many of these, such as John Johnson, were mayors or, like Ben Spoor, leaders of their councils.

A copy of the PhD thesis, to which this biographical listing is an appendix, is available in the Library at Englesea Brook Museum.

'PM made me an MP' (822 KB Adobe Acrobat document, opens in a new window)
The social, occupational, and denominational background of the MPs.