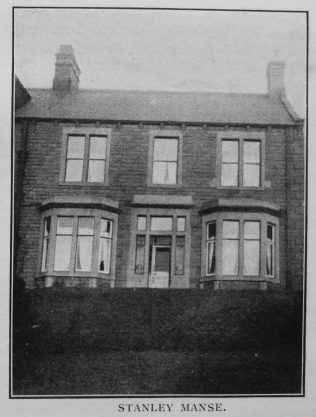 WHEN the many difficulties and disadvantages under which a Methodist minister necessarily labours in regard to his home life are remembered, it will be obvious that circuits should do their best to secure suitable houses for their ministers. There is a sense in which a minister possesses a house and not a home. Here he has no abiding city and the disadvantages, in this respect are perhaps, for his children. He may have known in his early years of the tender associations that gather round the home. Wherever he goes he carries with him pictures of the home of his childhood. He recalls the appearance of its rooms, the familiar furniture, the outlook, and wherever he may roam the word home will always be associated more or less with that spot.

The neighbourhood, too, will have its associations, and when he goes back to it after the lapse of years there will be various sacred spots to which he will repair, the sight of which will recall memories dear and associations pleasant. If in the country he will note changes, the growth of the trees, the removal of ancient landmarks here and there, and changes perhaps even in the landscape. He will visit the stream where he was accustomed to fish, the woods where he wandered in search of flowers, birds’ nests, or rabbits; and when far distant from these early scenes he will be able to recall them at will and they will in some measure influence his whole life. A Methodist minister’s children will have no such precious memories. They can vaguely recall a number of houses where they resided for a brief season. They will have painful memories of tentative efforts at striking their roots in the soil of friendship only to have them torn up again.

These things apart from any other considerations make it desirable that a minister’s house should be made as comfortable and homelike as possible. There is another reason which should vitally influence the authorities in this respect. The health of a minister and his efficiency will depend, in no small degree, upon the house in which he lives. He cannot hope that his personal taste will be met as in the case of a private individual. He has certain compensations in his life and must expect also its drawbacks; but there are many things which are quite within the reach of the average circuit that will contribute greatly to the comfort, happiness, and health of the minister and his family.

In the early days of the Connexion these things could not be largely considered. Circuits were often glad to secure almost any sort of a decent house for the minister; and too often their limited resources and imperfect ideas of the fitness of things compelled them to put up with houses of the most unsuitable kind. Happily, there has been during the last thirty or forty years an enormous improvement in this respect. As the social position of our people has improved, and the Connexion generally become consolidated, there has been an effort made to house the minister comfortably and respectably.

And yet occasionally wealthy men are found in our churches, occupying official positions, who seem entirely devoid of any sense of fitness in this regard. They occupy, it may be, mansions themselves, or commodious residences fitted with every modern appliance, but their minister must put up with inconvenience and ugliness to an unreasonable degree. They will spend money lavishly in church building and decoration, but the minister’s comfort is beneath their notice or concern.

But occasionally we come across an opposite state of things in quarters where we should least expect it. A colliery circuit, for example, which does not possess even at its head what can be called a town, is not the place where we should naturally expect a minister to be housed amid ideal conditions. But the writer recently found himself in the Stanley Circuit. It was his good fortune to be the guest of the superintendent minister. The manse, occupying a commanding situation, giving a splendid view of the surrounding country, is solidly built of stone and double-fronted, with a fine lawn stretching down to the road. Its external appearance is all that could be desired. Internally there is to be found almost an ideal combination of spaciousness and artistic finish. The rooms are all large, yet not too large, and the fittings throughout are modern and appropriate. The surprising thing was the evidence everywhere of good taste, of strength combined with beauty.

Entering by the front door you find a roomy hall, with the dining-room on the right and the drawing-room on the left, both handsomely furnished, the latter especially, being remarkable for the absence of showy nick-nacks and the presence of comfortable but handsome Chesterfield chairs. The Stanley Manse drawing-room is a place to live in and not merely for show. On the same floor there is a fine large kitchen and also the study. Not the little poky place too often found in circuit houses, but a spacious room, flooded by the morning sunlight.

Upstairs, of course, there are plenty of bedrooms, etc., etc. There is not a defective chimney in the house, nor a fireplace that does not admirably throw out the heat and quickly warm the room. It ought to be a satisfactory manse a hundred and fifty years hence. The whole reflects infinite credit upon the ministers and officials; and we wish circuits contemplating the erection of a manse could have a look at that at Stanley or procure a copy of the plans. It was a perpetual joy to look upon the various rooms in this house during the days the writer sojourned there. For it is a thing of beauty and utility that delights the eye, and affords comfort and satisfaction alike to the physical and mental nature.

It is not always possible to secure the right aspect for a house, and it has been the writer’s ill fortune nearly always to find himself in a residence enjoying a minimum of sunshine. But where possible, all houses in which a minister has to reside should have a southern aspect, and the study and main living rooms should have abundance of sunlight. One is often impressed with the fact that if the Connexion could have had a first-rate Connexional architect it would have saved vast sums of money and multitudes of spoilt chapels. The same thing is true of circuit houses. Certain it is that a church that gives its minister healthy conditions and a maximum of sunlight and air will get a good return in physical strength and the usefulness of the ministry.